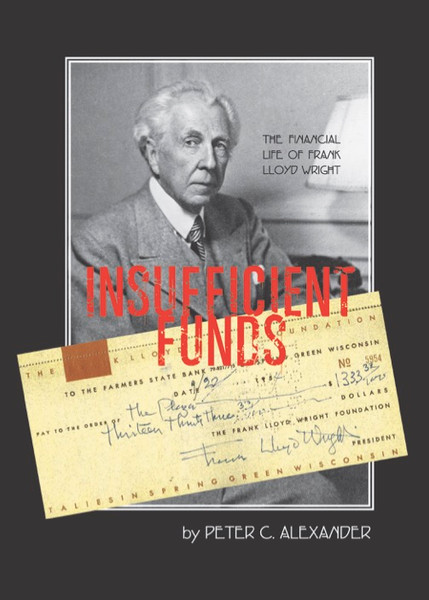 Dozens of books have been written about architect Frank Lloyd Wright’s architecture, aesthetic, and various design achievements; however, no one has looked at his business practices… until now. In this book, Peter Alexander focuses on the financial life of this American architectural genius after more than fifteen years of research. Wright was a spendthrift who earned a considerable fortune over his lifetime, but he was a man who never had sufficient funds to meet his expenses. Most often, his lack of financial stability was because he had an insatiable need to spend money on Japanese art, pianos, cars, and other assorted luxury items.

The material in the book comes from a wide variety of sources, including conversations and anecdotes that have been included in the many published works about Mr. Wright’s life and legacy as well as verifiable and apocryphal stories shared by docents conducting house tours. The book is also informed by considerable original material, including archival records about Mr. Wright’s financial life and interviews of two of his grandchildren, his Spring Green, Wisconsin neighbors, former apprentices, students enrolled in the Frank Lloyd Wright School of Architecture, and homeowners who worked with Wright to build their dream homes.

About the Author
Peter Alexander is a Visiting Professor at the Southern Illinois University School of Law, where he served as Dean from 2003 until 2009. He was also the Founding Dean of Indiana Tech Law School in Fort Wayne. In addition to his deanships, Alexander served as a faculty member at The Dickinson School of Law of the Pennsylvania State University and as a Visiting Professor at several schools including the William H. Bowen School of Law at the University of Arkansas-Little Rock and at the UNT Dallas College of Law. He teaches in the areas of Bankruptcy Law, Criminal Law, Evidence, Gender & the Law, Legal Research & Writing, and Trial Practice.

Alexander is the author of two monographs on bankruptcy topics and more than two dozen law review articles. He is also the co-author of a book with his late father, entitled "It Takes a Village: The Integration of the Hillburn School System," which was published in 2015 by Page Publishing.