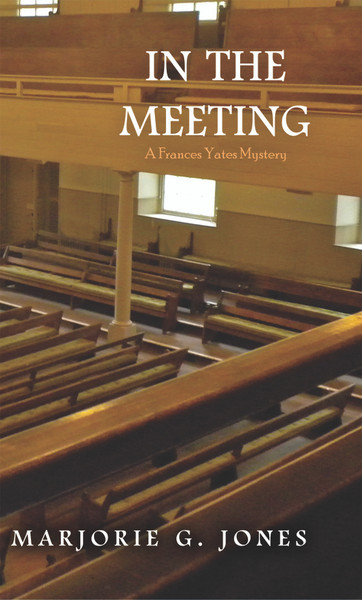 “In real life Dame Frances, at first glance, might strike an acquaintance as a lookalike for Miss Marple and Margaret Rutherford. Possessed of similar skills, here plied in the old world confines of Philadelphia, Dame Frances must delve into an unlikely criminal nest implanted amid Quakers, Unitarians and a motley crew of seekers and the dispossessed. Not surprisingly, her sleuthing more than excels at the task.”

“Marjorie Jones’ latest Frances Yates’ mystery “In the Meeting,” transports the reader into Philadelphia’s world of special collection libraries and religious institutions. Unbeknownst to Frances, her visit to Philadelphia set in motion a series of events resulting a murder and large scale theft. As Frances and her hosts tour the city, the reader is introduced to talented women who make these places function and a group of women religious challenging long held ideas about women’s place in organized religion. The unfolding of this mystery holds the reader’s attention to the last page.”

Invited to speak at the esteemed Athenaeum in Philadelphia, renowned British scholar Dame Frances Yates intends to explore the shared spiritual ideals of the Hermetic and Quaker traditions.

But along the way, while savoring the attractions of historic Philadelphia, she encounters murder In the Meeting and uncovers a ring of thieves plundering books and treasures from libraries and houses of worship throughout the city.

A graduate of Wheaton College (Norton, MA), the Rutgers School of Law, and the Graduate Faculty of the New School for Social Research (NYC), she has taught history and government at Mercy College (Dobbs Ferry, NY), the New School, and for college degree programs at Sing Sing and SCI-Phoenix correctional facilities.

She lives in Philadelphia with her husband.

Review of In The Meeting by Marjorie Gelb Jones. Reviewed by D. Kilgallen

“In The Meeting” is the third installment of the Frances Yates mystery series by Marjorie Gelb Jones, the noted biographer and educator. Some years ago, Ms. Jones wrote the definitive biography of Frances Yates, a British historian, scholar and leading expert on the Renaissance. Yates gained fame with her study of the Hermetic Tradition and the life of Giordano Bruno, a Catholic priest who was burned at the stake by the Inquisition in 1600 for his heretical theology. Yates’ book, “Giordano Bruno and the Hermetic Tradition,” published in 1964, is the seminal work on the topic. Yates worked and studied at the Warburg Institute in London. She died in 1981.

In the Frances Yates mystery series, Ms. Jones brings the historical Yates back to life in the current era as a fictional sleuth-scholar with a yen for travel.   “In The Meeting,” Dame Frances investigates the mysterious death of the caretaker of a Quaker meeting house. Along the way, Ms. Jones takes us on a delightful tour of cultural Philadelphia and its many iconic landmarks. We are also treated to Ms. Jones’ characteristically lush descriptions of food, clothing and décor, and her use of the narrative to spotlight the achievements of great women, the power of feminism and the presence of the Great Mother.

Dame Frances, the sleuth, does not seek out crimes to solve but they seem to cross her path wherever she travels. The death in the Meeting’s library is the lever that opens the door to exposing a network of thieves that is purloining valuable books and artifacts from Philadelphia's historic museums and churches. Yates’ clever detective work is understated, more thought than action, but highly successful.

In the end, of course, the criminal network is destroyed, the death of the poor caretaker is solved, and justice is done.  It’s an enjoyable ride from start to finish, and especially so for readers of the first two Yates mysteries as the lives and personalities of Dame Frances and the recurring characters are further developed. Don’t hesitate to pick up (or download) a copy of “In The Meeting.” You won’t be disappointed!

In the Convent: A Frances Yates Mystery - eBook

In the Convent: A Frances Yates Mystery

The Bottom of the Ocean - HB