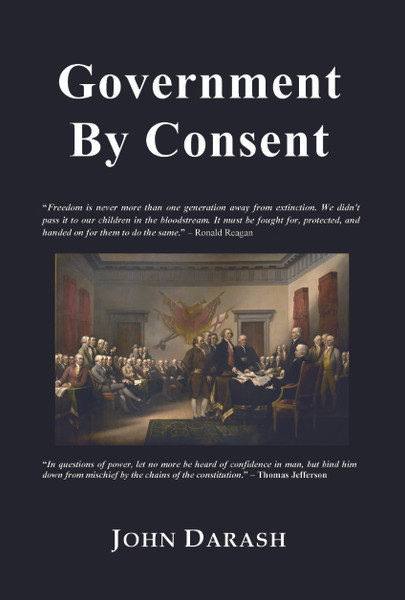 *Due to the size of the book there is a 10-15 business day printing/shipping time frame.

This book is the product of 12 years of research and the developing and organizing of National Liberty Alliance with a mission to properly educate the People as to their heritage and how to have government by consent by resurrecting “Committees of Safety” in every county in America. And then, and only then, will We the People be able to reinstate our Natural Law Republic and experience true Liberty.

Thomas Jefferson, the man who discovered America’s freedom formula wrote the foundation of our “Natural Law Republic” via the Declaration of Independence building America upon Eight Ancient Biblical Principles that build “Sound Government "they are;

1) Self-evident Truths, that are so obvious so moral that it cannot be denied

2) The laws of nature and of nature’s God.

3) All men are created equal

4) People are endowed by their Creator with unalienable rights

5) Life, liberty, and the pursuit of happiness are Paramount.

6) Governments are instituted to secure these rights

Upon these eight principles “We the People ordained and established” six directives for our government servants to follow as they exercise their vested powers. They are, to (1)form a more perfect union, (2)establish justice, (3)insure domestic tranquility, (4)provide for the common defense, (5)promote the general welfare, and (6)secure the blessings of liberty to ourselves and our posterity.

Today we have wandered away from His precepts,

We the People have lost sight of these “Natural Law Principles” and so have our government servants. We have lost our way and the blessings of Liberty are all but lost. But I believe that if we look into the blessings that God has bestowed upon America, we will be humbled, for He promised that “If my people, which are called by my name, shall humble themselves, and pray, and seek my face, and turn from their wicked ways; then will I hear from heaven, and will forgive their sin, and will heal their land.” – 2 Chr 7:14;Thomas Jefferson said, “If a People expect to be ignorant and free, they expect what never was and never will be.” I believe that this book has the potential of waking up America. It will dare you to know and have courage to use your own reasoning! And by the grace of nature’s God, we will save our Natural Law Republic!”

“The preacher sought to find out acceptable words: and that which was written was upright, even words of truth. The words of the wise are as goads, and as nails fastened by the masters of assemblies, which are given from one shepherd. And further, by these, my son, be admonished: of making many books there is no end; and much study is a weariness of the flesh. Let us hear the conclusion of the whole matter: Fear God, and keep his commandments: for this is the whole duty of man. For God shall bring every work into judgment, with every secret thing, whether it be good, or whether it be evil.” – Eccl 12:10-14. In Psa 119:45 God said that only the People that “seek His precepts will walk in liberty.” It’s time that His wayward sons repent and return to their Heritage founded upon His precepts, a Nation built upon His Incarnation. One Nation under God!

John Darash was born and raised in NYC, the Bronx. He is a Navy veteran that served as a boat coxswain aboard the USS Canopus (AS-34), a submarine tender primarilhy serving Atlantic Fleet Nuclear Powered Ballistic Missile Submarines. He’s a student of the Bible and teacher for 40 years. He is self-educated in architectural and design, construction management general contractor, construction law, and common law. He’s an entrepreneur of 40 years and co-founder of National Liberty Alliance. John and Kimberly, his wife of thirty-five years live in Hyde Park New York. They have three children. He believes that our founding fathers founded America by the providence of God. And it is the duty of all liberty minded People to uphold and defend the precepts that God has bestowed upon America, via a covenant made with God, a/k/a the Declaration of Independence.