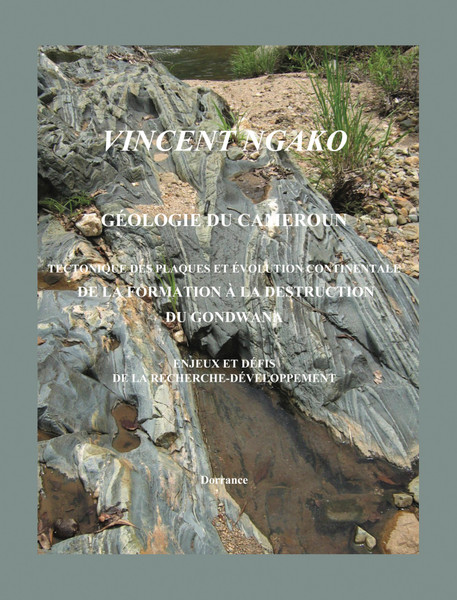 GÉOLOGIE DU CAMEROUN provides the timeline of Gondwana history, beginning with this supercontinent’s creation six hundred million years ago and its dismantling into Africa, South America, Madagascar, India, Australia, and Antarctica. Author Vincent NGAKO proves information on the research and development of government in most African countries as well as their social progress. This educational work, written in French, is for any lecturer, student, or politician interested in learning more information on this expansive continent’s history.

VINCENT NGAKO is a Senior Researcher. He is a holder of “Doctorate 3eme Cycle” in Structural Geology of the University of Rennes (France, in 1985) and "Doctorate d'Etat" in tectonics of the University of Yaoundé I (Cameroon, in 1999). He is membership of Publons, statutory member of the editorial board of the "Annales de la Faculté des Sciences-Université de Yaoundé I", guest reviewer of international scientific journals and external evaluator of PhD theses of the Cameroon state universities.

Vincent Ngako is author and co-author of many scientific papers in international reviews. Two among them are selected in the Top 25 Hottest Articles by Scopus (Elsevier), and one is quoted by Economic Geology. His educational achievements include a book on the structural evolution of northern Cameroon (CAESS edition, Rennes 1986). He is also the co-author of the Atlas of Cameroon (Jeune Afrique edition, 2007) and the collective book on global tectonics (INTECH edition, Croatia, 2011).

Between 1993 and 2007, Ngako was head of the Research Service of the Institute of Geological and Mining Research and coordinator of research programs in geology, hydrology, and energy. He was as well the focal point for Complete Test Ban Treaty Organization, Asia-Africa Scientific Platform Program of Japan, International Tropical Timbers Organization for the biomass project, French University and Scientific Research Cooperation on mineral accumulations in Africa. He has offered his expertise to Cameroon Mining projects as project geologist with Nuclear Energy Corporation Cameroon (2007-2008), Senior Exploration Geologist and Exploration Manager with Mega Uranium Corporation Cameroon (2008-2013), industrial plans with BASICS International (2016), and large scale mapping with PRECASEM (2017-2020).

Liberia In Need of Education (LINE): The need for sound primary and secondary education in Liberia is an imperative. Education enables a people to think creatively and act productively in the process of nation-building - eBook

Liberia In Need of Education (LINE): The need for sound primary and secondary education in Liberia is an imperative. Education enables a people to think creatively and act productively in the process of nation-building

80 Years After the Second World War: U.S. Courts and Prisons