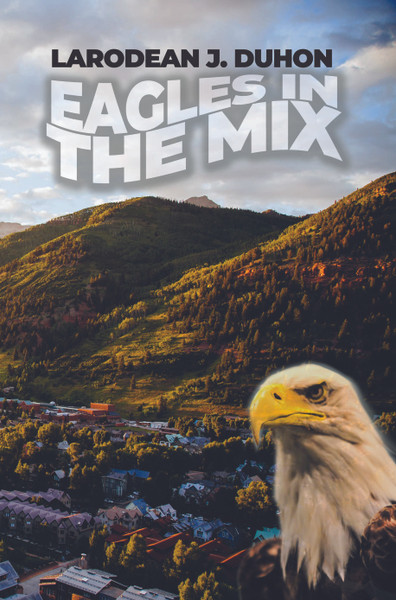 The Lassiter family’s story continues with Eagles in the Mix, a thriller set in a small West Virginia town. William Lassiter’s decision to make a life change by purchasing the Eagles Nest Sentinel has sparked buyer’s remorse because he’d be moving away from his family and leaving a job he’s enjoyed since graduating college with an investigative journalism degree ten years prior. Despite his turmoil, he ultimately decides to make the move, but an automobile accident puts that on hold, and while he’s recuperating, his father, Chester, and brother, JR, step in, going to Eagles Nest to assess the situation for William and protect his interests.

Immediately, suspicions are raised about the finances of the newspaper, and the shady, racist connections of the management. The KKK wants control of the paper to spread their propaganda, so when Chester and JR begin cleaning house and bring in outsider Jim Botte to manage the Sentinel, threats against Botte’s life soon make it clear he will be needing a bodyguard—enter Martin Esposito. No expense is spared to protect Botte, securing him in a remote cabin accessed by one mountain road and setting up a manned guard station. Meanwhile, though doctors have advised William that while he will walk again, he will be confined to a wheelchair for some time. Rather than waste time in the wheelchair doing nothing, he decides to use his investigative skill to solve a murder believed to have been the work of a brutal mafia hitman.

Larodean J. Duhon was born in the oil fields of Edgerly, Louisiana in 1938. He was delivered into this world by midwives. He was a middle child in a family of eight boys and three girls. The family moved to Westlake, Louisiana when he was eighteen months old. He lived there until finishing his formal education. He then entered the US Air Force. While in the USAF, he served a year on Ascension Island, where they built a missile tracking system for the future space program. After the Air Force, he attended Tarrant County College, where he won the Wall Street Journal Award for scholastic standing. While his degree was in the business curriculum, he began a successful engineering career, where he was the principal designer for telecommunications for Texas Stadium and assistant designer for the Dallas/Fort Worth Airport. He wrote several articles for Telephony and Telephone Engineer & Management as well the Master Builder Magazine headquartered in Kingston Jamaica, WI. He spent eleven years as a contractor working for IBM in the development of the token ring network. He is currently retired and residing with his wife of nearly sixty years in southwest Georgia.

Eagles in the Mix - eBook