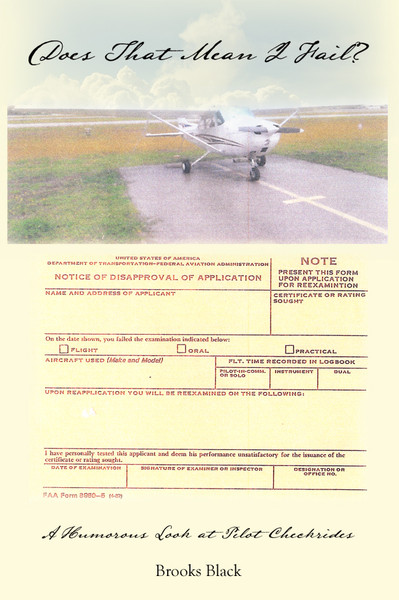 Does That Mean I Fail?: A Humorous Look at Pilot Checkrides
by Brooks Black

As collection of humorous first-hand accounts of pilot check-rides, Does That Mean I Fail? is geared towards both pilots and non-pilots. After years of Designated Pilot Examiners (DPEs) thinking and saying, Nobody would believe this, and, Somebody should write a book, Brooks Black finally has. Does That Mean I Fail? is the result of nearly 100 check-rides and the authors own personal experiences. Combined, they allow for new and unique insight into the exciting world behind flight. Brook Blacks writing reads with a good dose of humor and information. It is at once highly detailed and exciting. Does That Mean I Fail? is sure to both entertain and enlighten.

Born and raised in Toledo, Ohio in 1943, Brooks Black went on to earn a Bachelor of Science degree in Chemical Engineering from the University of Toledo. He began flying in 1967 and is a pilot, flight and ground instructor, aircraft mechanic and Designated Pilot Examiner. He also received certification as an Aircraft Accident Investigator from the University of Southern California. The stories from Does That Mean I Fail? result from his DPE career. He is also a USCG captain, certified to operate up to a 100-ton vessel and has roughly 17,000 flight hours.

He is married with one daughter. He and his wife, Lena, enjoy cruise ship travel, and they own a SeaRay 34 Express. Brooks Black also enjoys model railroads and once served as president of the Palm Beach Model Railroad Club. His family also includes the love of four Maltese, two of which were bred and raised in their home.

Why Does My Cat Look at Me Like That?

Beneath the Blades: Humorous Confessions of a Chopper Pilot- eBook

Beneath the Blades: Humorous Confessions of a Chopper Pilot

Depression: How Psychotherapy and Other Treatments Help People Recover

Demons and Angels: A Poetic Account of Darkness and Light