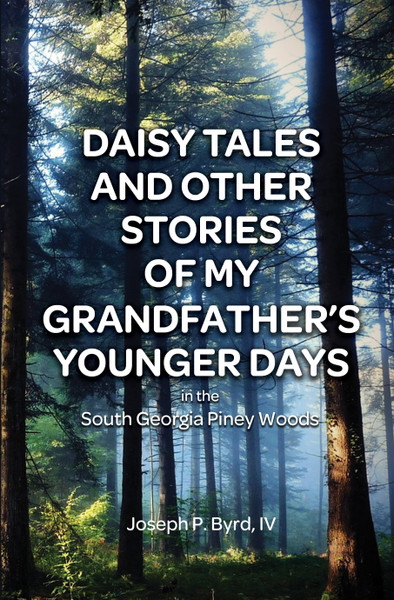 Daisy Tales and Other Stories from My Grandfather’s Younger Days in the South Georgia Piney Woods
is a book of stories, remembrances and maybe a few tall tales as recounted by the author’s maternal grandfather, William Leroy Edwards.
Much of the material, obtained by his father, was transcribed by his mother in the summer of 1955 when his widowed  grandfather visited their home. Upon reading his grandfather’s stories, the author was transported back in time to the Georgia frontier and impressed with his sense of humor. Initially, thinking it a project to share with family, the author concluded these stories would appeal to a larger readership who would be interested in memoirs/history/Southern humor in addition to family history.

Joseph P. Byrd, IV is a seventh generation on both sides of his family, and a descendant of fifteen Confederate soldiers. He was born in Savannah, Georgia and has lived in the South most of his life. He graduated from Stephen F. Austin State University in Texas. After college, he attended the US Navy Officer Candidate School in Newport, Rhode Island, received his commission and graduated from the Navy Supply School in Athens, Georgia. Afterwards, he served as Assistant Supply Officer on the USS Delta (AR-9), a Pacific Fleet Repair Ship, home ported in Alameda, California, and station ship in Hong Kong, Taiwan, Japan, Viet Nam, and the Philippines.  Most of his civilian career has been spent in the field of marketing, including several years as a marketing research account executive. Along the way, he served for eight years on the faculty of Lyon College in Arkansas, and taught as an adjunct instructor at Christian Brothers University in Memphis. After leaving the academic world, Byrd spent his final years as a consultant and Marketing Research Project Manager at the UPS Corporate Headquarters in Atlanta. Since retiring from UPS, he has pursued his interests in historical research, genealogy, travel, music, and writing. He is the author of Confederate Sharpshooter Major William E. Simmons: Through the War with the 16th Georgia Infantry and 3rd Battalion Georgia Sharpshooters, Mercer University Press, 2016. In addition, he has made numerous presentations to community groups and organizations, written several articles, and composed a number of copyrighted songs. Byrd currently serves as Elder Emeritus at the Vine Community Church (PCA) in Forsyth County Georgia. Through the years, he has been involved with the Sons of Confederate Veterans, the Atlanta Vietnam Veterans Business Association, Toastmasters International, the American Legion, Delta Upsilon Fraternity, Rotary International, The Georgia Historical Society, The Gwinnett (GA) Historical Society, and the Oklahoma Historical Society. He is blessed to be married to his wife of fifty years, the former Sandra Jean Jones of Oklahoma City. They have two married daughters, six grandchildren, and three great-grandchildren.