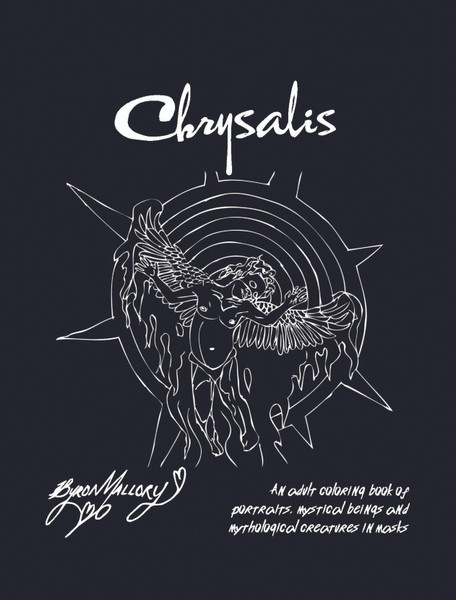 The Bible's Book of Revelation is considered to be a prophetic warning of things to come.

Chrysalis Adult Coloring Book is the artist's satirical perception of the Book of Revelation.

The images are simple, yet complex.

Chrysalis: An adult coloring book of portraits, mystical beings and mythological creatures in masks provides insight into the invisible spiritual battle of good versus evil. Many of the masked images are reflections of today's society... Just who are these people? It is well documented that today's society is a cornucopia of masked individuals who are falling from grace for the love of money. Those who repent will be saved; those who do not, will face eternal punishment.

The message of Chrysalis is quite clear. Its cover, entitled "Sun Angel", is representative of the 7 Angels presented in The Book of Revelation. White symbolizes purity and righteousness. The final image inside Chrysalis is a White Horse, symbolizing victory.

The final message?
JESUS IS COMING!

Byron Mallory supplemented his meager income by painting portraits of family members, acquaintances, and others. A gifted sculptor, he once created a self sculpture to scale (Byron was 6'5" tall). He had a fascination with the concept of castles, knights and dragons and often sported tights and tunic attire to express this fascination.  Most women he met were greeted with a bow of the head and kiss of the hand.  To him, every woman was beautiful.
Byron's favorite creations were grandiose: i.e., massive murals and large sculptures.  His favorite sculpture, a dragon, measured 8 ft high and 9 ft long. He spent hours creating scales made of wax and tediously placing them on the back of the dragon that he hoped would someday be cast into bronze. Byron's life turned upside down in 1973 when he says an Angel appeared before him at Denver's City Park. It was at that time he was hurled into a lifetime of spiritual warfare.

Through My Eyes and Into Your Heart by Yvonne Betts