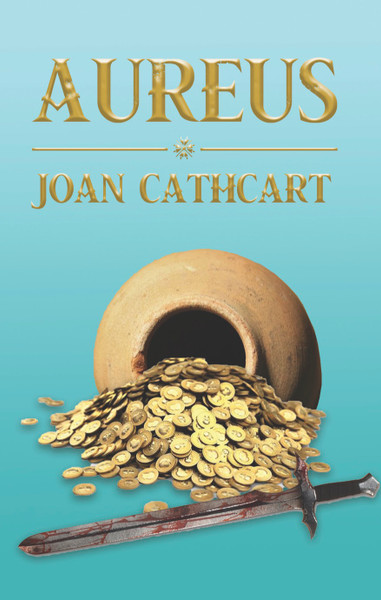 In twelfth-century England, soldiers’ bloody corpses flew into a castle courtyard, catapulted by a trebuchet, on the order of King Henry II. The king had declared war on the Earl of Boulton, giving him the opportunity to execute a “terrific air show,” in the mocking words of Thomas Becket, Archbishop of Canterbury. This astonishing performance was just one of many events provoked by the discovery of a Roman treasure, the Aureus.

Political and military conflict dominated Henry’s reign. With new words and weapons, Aureus explores this violent landscape and the monumental egos that drove these struggles. Marriage betrothals, begotten by the need for war, peace and allies, were the critical glue in patching together the shifting coalitions of the Middle Ages. This practice provides the backdrop for Aureus’s budding teenage romance, interrupted by parental match-making, warfare, exile, the mighty English church and, of course, the quest for the treasure.

A bachelor’s degree in International Relations and an M.A. in Political Science gave Joan Cathcart an interest in world history, which was useful in a twenty-one-year-long high school teaching career. After that, brief tenures in radio and magazine advertising led Cathcart to the practice of real estate, followed by retirement, which has allowed her time to write, travel, test tantalizing recipes, play tennis and bridge, join her community hospitality committee, learn all three sections of Yang Tai Chi, and enjoy lap swimming. By 2021, Cathcart had swum fifty miles or more annually for thirty-four consecutive years at the health club near her home in Southern California.

Face to Face with Your Father: A Devotional Journey Through the Gospel of John

It May Be True