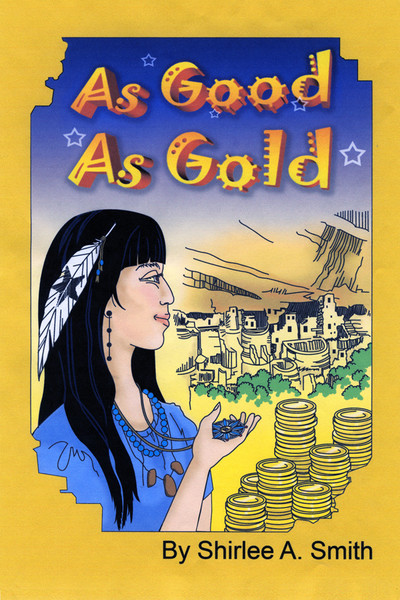 As Good as Gold
by Shirlee A. Smith

In a civilization where money, alcohol, guns, crimes, and diseases dont exist, and a computer-based way of living is being practiced, there are still greedy peoplethe villainswho want to spread havoc and alter their peaceful existence.

Its the year 3500 in Denver, Colorado, and a class of sixth graders are touring the Denver Mint Museum. Just before the whole class packs up for the tour, Penny and Mark, students in the same class, drifted away from their group, and unfortunately hear Bill and Jacks plot to rob the museum and go back in the past as time travelers. Bill and Jack kidnap the two kids and bring them to a cave in Cliff Palace, where the spirit hole, which can bring them to the past centuries, is located.

Though successful on their first attempt to travel back to the twenty-first century and steal money, Bill and Jack dont know they are being followed by Evening Star, also known as Pyxis, an Indian girl from the Anasazi tribe of the year 1150. Pyxis helps Penny and Mark get away from the two thieves by deceiving them with their request.

Shirlee A. Smith was a journalist with the U.S. Air Force for almost a decade. She has been published in many government publications and was a newspaper freelance writer in California for a few years. She is currently a computer specialist and writes childrens stories in her spare time. Originally from Taunton, Massachusetts, she now lives in Tucson, Arizona with her husband and two dogs. Ms. Smith tries to perform at least one good deed a day because she believes in the joy of giving. She is convinced that true wealth is the good that we all do in this world, because generosity brings her pure joy.