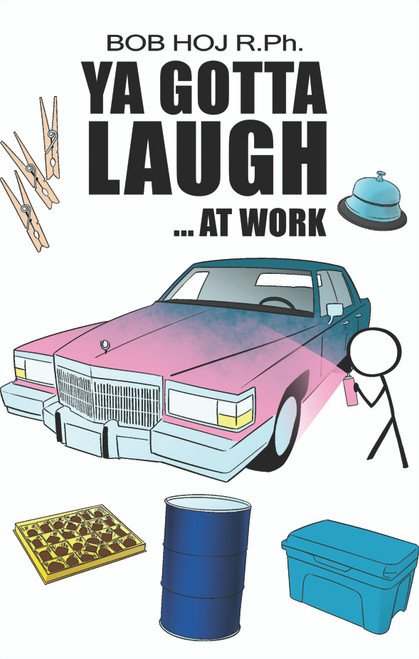 Ya Gotta Laugh...At Work is a book of humorous stories that author BOB HOJ R.Ph. has experienced throughout his thirty-year professional career. When Hoj first came up with the idea, he began relaying his stories to his peers who then relayed some of their own funny stories from their workplaces to him too, thus sparking a larger conversation about office humor, and giving way for Ya Gotta Laugh...At Work - So take away a memory, a laugh, and a smile!

Author BOB HOJ R.Ph. is a self-made man whose childhood dream was to become a pharmacist, which he pursued as an adult and now also holds a minor in chemistry and a BA in history too. Reading pharmacy journals became his only passion allowing him to become a rather expert on drug prescribing, use, and testing of pharmaceuticals. Hoj worked for forty-two years in Big Pharma in quality control, analytical testing, manufacturing, and finally R&D working on aids and cancer drugs for over twenty-five years until his retirement. He also worked part time in retail pharmacy and Hanemenam hospital for many years.

Hoj grew up in a rough and tough inner city called Camden, NJ. He had the honor of hugging and kissing the Liberty Bell many, many times as a young child when he and his mother walked through Independence Hall for several summers as it was opening. He even played in the signing room on the second floor. Bob Hoj R. Ph.’s parents were second generation immigrants with not even a high school education. His father was born in an Indian tent in Michigan in 1912. His first generation parents were loggers in the woods of Michigan living in an Indian village. His mother was born to BACCI who came to the USA in 1860. Hoj had two older brothers who also were self-made men, obtaining their college degrees through hard work and part-time employment while attending college. As a young teenager, Hoj took up small-game hunting to avoid being part of a gang and rode buses to Hammonton, NJ and Turunersville, NJ to hunt and fish as a young teenager.

Hoj has been married for fifty-plus years to Marie, the love of his life and together, they have three great adult children and five wonderful grandchildren. Life has been hard but good for Bob Hoj R.Ph. and he thanks Dr Eugene Dewald (PHD - Physical Chemistry; deceased) for allowing him to realize his career aspirations.