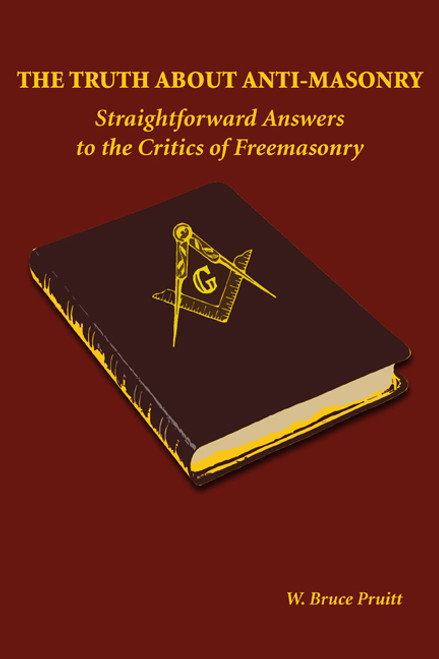 
Availability: Usually ships in 2-3 business days. + Available for immediate download to your computer in e-book format - see bottom of page.
___________________________________________________________
The Truth About Anti-Masonry: Straightforward Answers to the Critics of Freemasonry
by W. Bruce Pruitt The three basic tenants of Freemasonry are Brotherly Love, Relief, and Truth. Except for religious bodies, it is the oldest organization known dedicated to encouraging brotherhood, support of family, and relief of want. In spite of these objectives, the Masonic Lodge has been misunderstood and criticized by some individuals as being a cult, anti-religious, politically motivated, and a selfish conspiracy. This book investigates the various arguments posed by Masonic critics and provides logical answers that clearly refute all those ideas. It will be valuable for both members of the craft and those who still have doubts about the merits of the fraternity. ABOUT THE AUTHOR W. Bruce Pruitt is a native of Anderson, South Carolina, where he was a member of the Order of DeMolay and was raised to the Degree of Master Mason in May of 1953. He received B.S. and M.S. degrees in physics from the University of North Carolina. He held management positions at Huggins Laboratories, Varian Associates, Parks and Pruitt Associates, and Lockheed Missiles and Space Co. Mr. Pruitt has been an active and dedicated Christian since his teenage years. He has held various positions of leadership in the Presbyterian and Evangelical Covenant Churches, as well as serving as a choir director and Bible and Sunday School teacher. Pruitt has been married to his lovely wife, Shirley, for over fifty years. They have three married daughters and eight grandchildren. Articles on Masonic and other subjects have been published in Knight Templar Magazine, Philalathes Magazine, Scottish Rite Journal, periodicals of the Grand Lodge of South Carolina and California, The Encompasser, and Program Management Journal. He also authored a book entitled Readings in Operations Management, published by San Jose State University. (2008, paperback, 56 pages)
×