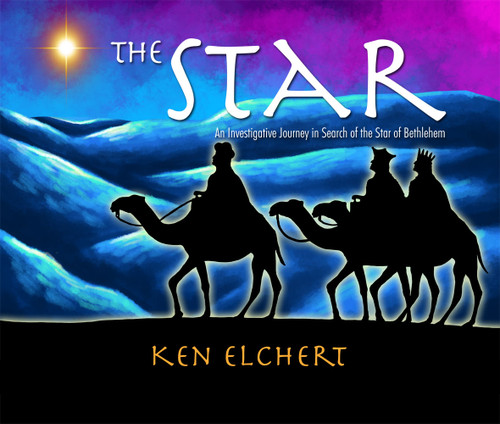 The Star: An Investigative Journey in Search of the Star of Bethlehem
by Ken Elchert

In the world of Christianity, the Star of Bethlehem is a miraculous sign of the fulfillment of a prophecythe birth of the Lord Jesus Christ. Its significance for many centuries not only amazed the believers but it also piqued scientific curiosity that many are still trying to find out if it is a momentous astronomical event or just borne out of a fictitious story.

The Star led the Magi to Jerusalem first and then to Bethlehem where Jesus was born, journeying a thousand miles to see whom they believed was the new king of Judea. Those who study this event are also baffled at the exact date when Jesus was born. And that date is important if they want to prove that the Star was a natural phenomenon seen by the Magi in the heavens.

After viewing the 2007 Stephen McEveety-produced video, The Star of Bethlehem, Ken Elchert, a retired aerospace engineer, became intrigued that he started his own investigation about one the worlds most reveled event. Using his knowledge in astronomy, history, and the Bible, he gathered a myriad of evidenceincluding details of all the important astronomical events of 3 BC and 2 BC as well as a new candidate for the date of the Nativityto support his assumption that the Christmas Star may be a natural object, a planetmay be Jupiter.

The Staran Investigative Journey in Search of the Star of Bethlehem may be the answer to the question that still hangs in the air or a further catalyst towards the truth.

Ken Elchert worked for Rockwell International and Boeing for over thirty-seven years. He was a lead engineer for liftoff and Solid Rocket Booster separation analyses in the Space Shuttle Program and a systems engineer supporting ascent performance in Downey, California. Years later, he performed guidance, navigation, and sequencing analyses during development of the Delta IV launch vehicle and systems engineering work on Missile Defense in Huntington Beach, California. This BA in Mathematics/Physics graduate of Saint Joseph College and BS Aeronautical/Astronautical Engineering alumnus of Ohio State University has been married to his wife, Celia, for thirty-three years; they have three children. He is a member of the American Institute of Aeronautics and Astronautics, the Planetary Society, The National Space Society, and the National Geographic Society. His interests include manned spaceflight, unmanned planetary missions, astronomy, rocketry, history, archeology, and philately.

In Search of God: A Journey Shared with Lauren