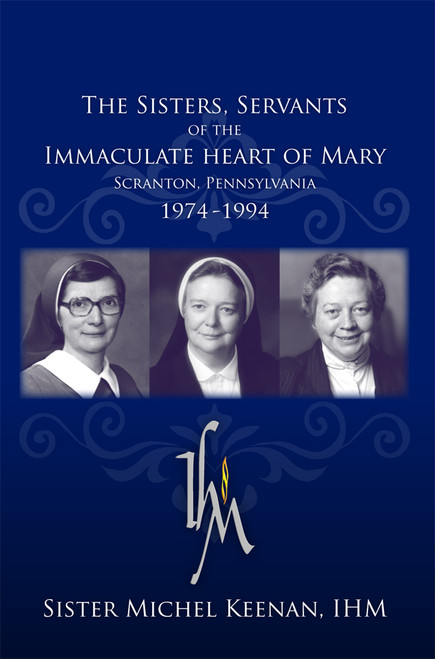 The Sisters, Servants of the Immaculate Heart of Mary
by Sister Michel Keenan, IHM

The Sisters, Servants of the Immaculate Heart of Mary is arranged by the terms of office of three major superiors of the Congregation of the Sisters, Servants of the Immaculate Heart of Mary, Scranton, Pennsylvania, from 1974-1994. This work follows the prior volume by Sister Michel, published in 2005, covering 1919-1974. As previously, the work attempts to capture the impact of the times and events in the world at large, particularly Vatican II, on the decisions for ministry and religious life in this Congregation of women religious. Serious change in religious life was not easy. Readers may learn of the challenges to administrators and to individual Sisters during these periods.

Sister Michel Keenan, IHM, was born in Payette, Idaho, and grew up in Spokane, Washington, where she was educated by the Sisters of the Holy Names for seven elementary school years, the Sisters of IHM for three years, and the Franciscan Sisters of Perpetual Adoration for two of her high school years.

She received her B.A. and M.A. from Marywood University in Scranton, PA, and her Ph.D. from the University of Notre Dame, Indiana. As a Sister of IHM, she taught in secondary schools from Pittston, PA, to Portland, Oregon, and was a faculty member in philosophy, graduate dean, and academic vice president at Marywood University until elected as IHM Congregation superior general for two terms.

Later she served as a faculty member and assistant vice president for ten years, and as special assistant to the president, Sister Kathleen Ross, snjm, for three years at Heritage University, Toppenish, WA. She has published three previous historical works: The Sisters of IHM: 1919-1974, The Story of the Native Irish Sisters Who Entered the IHM Congregation, and A History of the IHM Sisters in South America. She also has written unpublished poetry and is an infrequent but avid outdoor birder. She also appreciates music in symphony, opera, or show tunes.

A Myth Among Us