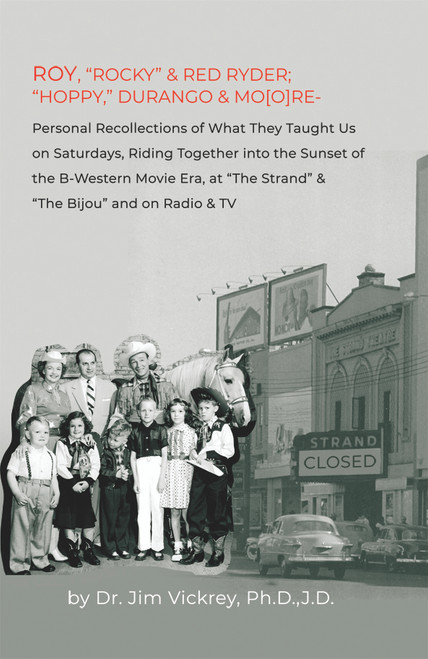 From Chapter One: The Wages of Cinema -- on Coming of Age on the B-Western Movie Range, to the Conclusion: Why You Can Yet Join Me in Riding the Range Again ..., author Dr. Jim Vickrey is "hopeful that the experiences I've had while researching and writing this movie-related memoir will engender within readers the same happy thoughts I had and have resulting from my first and every subsequent encounter thereafter with the world of Western, particularly B-Western, cinema”

D r. Jim Vickrey is a native of Montgomery, Alabama, and an Auburn, Florida State, and Faulkner University alumnus. He is a lawyer and former university president, as well as a Professor Emeritus of Troy University, and taught courses on argumentation, communication, the law, the movies, and/or rhetoric at six Southern universities from 1965 to 2013.

A widely published author and scholar, Dr. Vickrey crafted more than 1,500 oral and/or written commentaries on communication, the First Amendment, the movies and other mass media, rhetoric, science & religion, and more, on Alabama commercial TV and public radio and TV stations and in state newspapers — based on many of the more than 3,000 feature films he reckons he’s seen in his life to date, since being turned on to Sound Era movies in the late ’40s.

An award-winning photographer, speaker, and writer, Dr. Vickrey has also been an active supporter of the American Film Institute since the early ’70s, and an active member of the Faulkner [University] Law, the Montgomery County, and the Alabama State Bars.

From 1988-2017, he was an adult teacher in the nation’s largest United Methodist Church Sunday School program, composing some 2,000 outlines, handouts, and papers in the process.