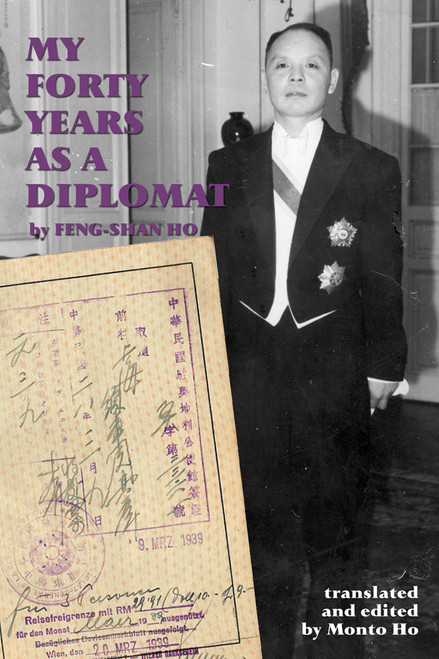 My Forty Years as a Diplomat
by Feng-Shan Ho, translated and edited by Dr. Monto Ho

The English version of this autobiography is indeed impeccable and very readable, thanks to the translator, who commands a good style of writing. I myself have enjoyed reading both the original and the translation. My hat is off to both the father and the son, who have provided us with this volume, which is an honest record of our time. I would like to invite other readers to explore by themselves this book of rink-side observations of the history of China as well as of the world during the eventful twentieth century.

Feng-Shan Ho was a diplomat for China during a turning point in the countys history. In 2001, he was posthumously honored by Yad Vashem for issuing visas to Jews when he was Consul General in Vienna from 1938 to 1940. His struggle in diplomacy was fighting for the dying Republic of China under Chiang Kai-shek as the country shifted from a republican to a communist state. This struggle is brought to life through Hos account of his ambassadorships in Egypt and Mexico. In retrospect, the efforts of Ho and the Nationalists ultimately failed; however, Hos career is marked by many professional and personal successes that promoted the cause of Nationalist China.

My Forty Years as a Diplomat recounts Feng-Shan Hos personal observations and conversations with important political and diplomatic figures around the world, providing a unique view of this important moment in Chinese history. Throughout his diplomacy, Ho was a steadfastly loyal and moral man who possessed ambition and fortitude, valued education and discipline, fought for righteousness, was compassionate to those in need, and liked nothing better than a good conversation with a friend. His autobiography contains valuable material for the study of modern history, as well as for the observation and contemplation of intelligent readers.

Monto Ho is the son of Chinese diplomat Feng-Shan Ho. Monto earned his bachelors degree at Harvard College in 1949 and his M.D. at Harvard Medical School in 1954. Now retired, Monto Ho worked as a Professor of Medicine, Pathology, and Microbiology; the Chair of the Department of Infectious Diseases and Microbiology, Graduate School of Public Health; and the Chief of the Division of Infectious Diseases, Department of Medicine, School of Medicine at the University of Pittsburgh from 1965 to 1997. He was elected byAcademia Sinica (Taiwan). He was also a Distinguished Investigator with the National Health Research Institutes in Taiwan from 1997 to 2002. Monto and his wife, Carol Tsu Ho, live in Pittsburgh, Pennsylvania, and they have two children: Bettie Pei-wen Ho Carlson and John Chia-wen Ho.