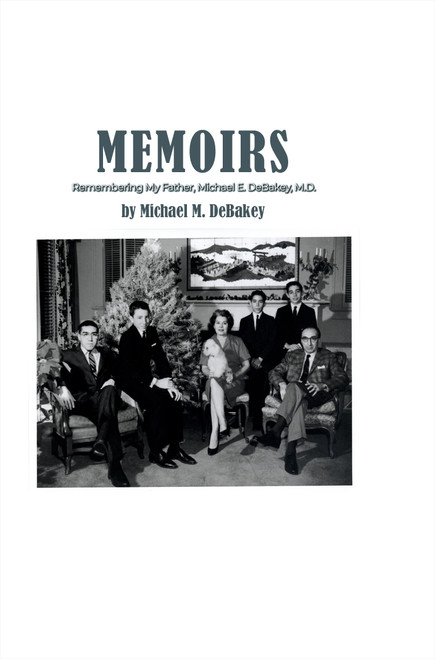 This is a story of a son growing up with a famous father and the evolution of their relationship as he strives for success on his own terms while seeking his father’s acceptance.

Michael E. DeBakey, M.D., had an illustrious and well-respected career that spanned more than seventy years. From his foundational years in medicine during World War II to his innovations in cardiovascular care to his work as the head of Baylor College of Medicine in Houston and then as one of the pioneers of Texas Medical Center, the largest medical center in the world, Dr. DeBakey was a force to be reckoned with in the medical community and a source of inspiration and respect among his family, friends, and colleagues.

Dr. DeBakey’s legacy includes more than sixty thousand cardiovascular surgeries, dozens of cardiovascular inventions, more than 1,600 authored books and articles, and even the covers of TIME and LIFE magazines.

Memoirs is a look not just at Dr. DeBakey’s celebrated life and career, but of his relationship with his son, Michael. Dr. DeBakey’s fame and success, while sometimes difficult to measure up to, served as a great motivator for Michael’s own success and achievements.

A career with Texaco took Michael to Lima, Peru, right out of college. In Lima, he married, raised his family, and started his own business. He continues to live there.

Memoirs is a personal account of Michael’s childhood and adulthood as he learned from his famous and well-respected father while discovering his own happiness and success.