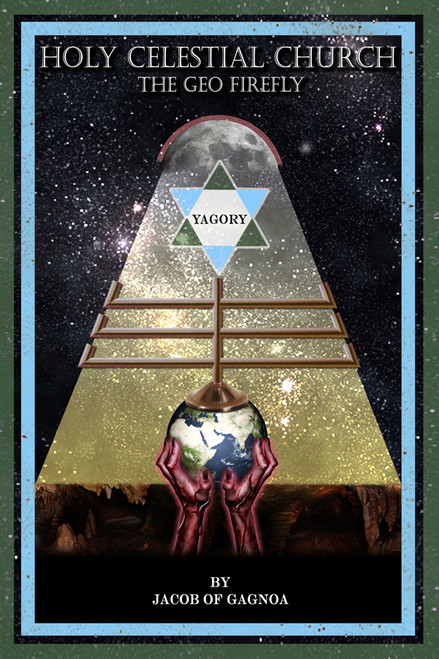 Holy Celestial Church: The Geo Firefly
by Jacob of Gagnoa

Do you believe the end of the world is near? Many prophets, religious scholars, and scientists point to mounting evidence that the world as we know it, is coming to a close. Jacob of Gagnoa is a prophet of Jehovah Yahweh who has received visions from celestial beings since he was six years old. In 1984, Jacob of Gagnoa joined the Holy Celestial Church, and on May 22, 2002, he received a set of twenty-one symbols aimed to complete the building process of the church. The Holy Celestial Church was sent forth by Jehovah the creator as the last church of the world before the advent of the Apocalypse of Jesus. The mission of the church is to gather the Saints and prepare them for the doomsdays set to begin on December 21, 2012, and scheduled to last twenty-two years.

In Holy Celestial Church, Prophet Jacob of Gagnoa presents the tenets of his fold. He wants you, his reader, to know that Jehovah the Creator loves you, and an encounter with his writings is not just a mere coincidence. You have been divinely selected to hear the oracles of the church. Free yourself from the bondage of Lucifer, and become an active ambassador by relaying the message about the Holy Celestial Church, the Church of Vespers.

A native of the Ivory Coast (Cote dIvoire), Jacob of Gagnoa has lived in the United States for the past twenty years. He is married with six children and lives in Tampa, Florida. Jacob of Gagnoa has earned a Bachelor of Science and Master of Science degrees in Business Administration from Strayer College in Washington, DC. He also has training in Oracle Database Administration and Oracle Financials. By a voice of God, Jacob of Gagnoa was prompted to establish a church and preached about the end times of the world. Holy Celestial Church is one avenue through which he will relay the prophetic messages received from God.