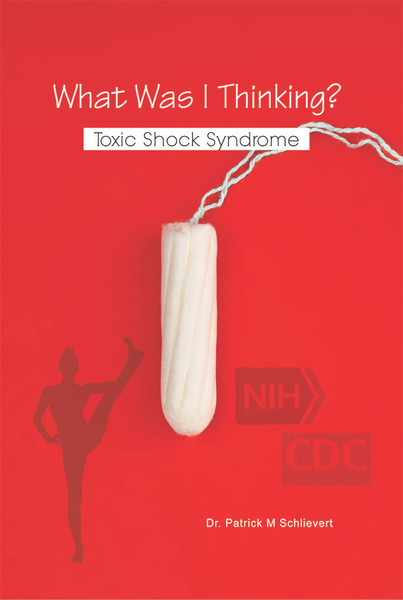 What Was I Thinking? Toxic Shock Syndrome

Dr. Patrick M Schlievert was in his first year as an assistant professor of Microbiology and Immunology, having spent two years trying to get the medical and scientific communities to recognize that there was a disease called toxic shock syndrome. Because he could not get even the Federal Government to recognize this disease, he started a national news media blitz that became second only to the Iran hostage crisis in 1980. Dr. Schlievert took this chance at great risk to his career because he grew up poor and had to take risks even to stay alive, and because his allegiance was to the American public and not to the biomedical science community.

In this book, Dr. Patrick M Schlievert describes the events in chronological order, including science, a lot of pseudoscience and opinion, and a lot of the incredible politics behind toxic shock syndrome. He also describes the many forms of toxic shock syndrome in order of appearance, including the tampon associated disease and why it happened, non-menstrual toxic shock syndrome, and the flesh-eating streptococcal disease. The book is designed to tell Americans that many parts of their federal healthcare system are broken, including various aspects of the Centers for Disease Control and Prevention and National Institutes of Health. It is Dr. Schlievert’s ultimate hope that Americans will read this book because it is written for them. It will help them take partial responsibility for their own health, and hopefully, they can help reorient the United States healthcare system to do its job, namely help them.

The National Institutes of Health claims that Dr. Schlievert and his colleagues’ interest in new diseases and their causes is not sufficient grounds to have funding, to which he would ask everyone: If this is not the number one goal of the National Institutes of Health, what should be? And furthermore, why should this federal bureaucracy exist if that is not the goal? Dr. Patrick M Schlievert entered the toxic shock syndrome field at its beginning, and he remains here near its end. He wishes he could say the diseases are at an end, but they are not.

Growing up exceptionally poor, Dr. Patrick M Schlievert was expected to start working full time when he was fourteen years old. He graduated from Humboldt, Iowa high school in 1967 and began that fall as an undergraduate at the University of Iowa. He received a bachelor’s degree in general science, emphasizing geology, and then later a PhD in innate immunity in the Department of Microbiology, College of Medicine, and University of Iowa. Dr. Schlievert then spent his career in major public universities doing the three things expected of faculty: teaching, research, and service. He greatly enjoys teaching medical students, dental students, and undergraduates; his make-up is to be a large classroom educator.

Dr. Schlievert was married in 1970 to Shirley and they have one daughter, Sara who lives and works in New York City. He has many hobbies, but his main hobby is running. He has run twenty-eight marathons, completing his last marathon this past October, and plans to run his twenty-ninth in 2020. Dr. Schlievert also plays the guitar, likes to oil paint, likes to read, reading one new book every week, and also enjoys writing. He is currently writing a fiction book and has written and published nearly 450 manuscripts. Finally, Dr. Patrick M Schlievert is a jack of all science trades—a real science nerd. He likes to examine astrophysics in the evening, he likes to look for pretty rocks that are worth lots of money when he travels someplace new, he loves microbiology and immunology and how they oppose each other, and lastly, he truly enjoys studying momentum, whether in playing racquetball, figure skating, or pole vaulting.

“A clarion call to the country about the need to address a major (and sometimes fatal) women's health issue, "What Was I Thinking? Toxic Shock Syndrome" is an extraordinary and unreservedly recommended addition to personal, professional, community, medical school, college and university library Immunology & General Women's Health collections, as well as the personal reading lists of health care providers, government health policy makers, and non-specialist general readers with an interest in the subject of Toxic Shock Syndrome.” (The Midwest Book Review)

What Was I Thinking? Toxic Shock Syndrome