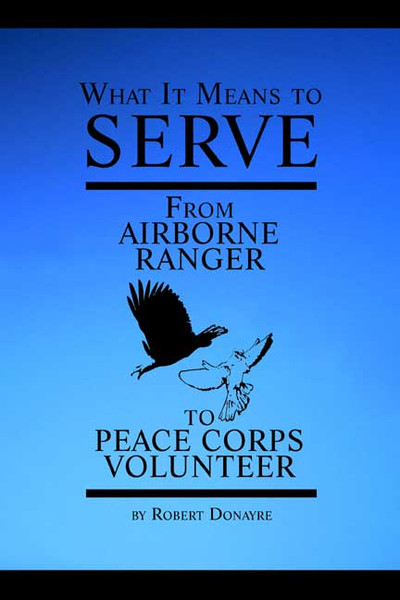 by Robert Donayre From Somalia to North Korea and on to the former Soviet Union, What It Means to Serve: From Airborne Ranger to Peace Corps Volunteer is the intriguing and witty account of Robert Donayres six years of service for the U.S. Federal Government in two undoubtedly conflicting organizations the U.S. Army and Peace Corps. At the age of seventeen, Donayre enlists to become an airborne ranger, young and unsure of the uncertainties that surround his future. As he becomes immersed in military life, he finds himself traveling, drinking, and meeting women during short, army-allotted excursions. When his four-year contract comes to an end, Donayre spends seven years earning his masters degree and then decides to do the unthinkable: join the famously liberal Peace Corps. Assigned to Moldova, a small country in the former Soviet Union, he becomes engrossed in a politically conflicted culture thats notoriously intertwined with corruption and poverty. Donayres two-year stint as a teacher of English as a foreign language at the university level allows him to view, first hand, the effects of a broken nation on an emerging generation of workers. What It Means to Serve: From Airborne Ranger to Peace Corps Volunteer is a memoir that takes its readers through a range of politically charged emotions as Donayre openly engages in the dualities of war and peace. ABOUT THE AUTHOR Robert Donayre currently lives in Cambridge, Massachusetts, a far cry from his native city of Imperial Beach, California. He is a teacher of English as a second language for the New England School of English. He has received a B.A. in history from UC Santa Barbara and an M.A. in history from CSU Sacramento. In his free time, Donayre is an avid traveler and reader of nonfiction. peaceranger@gmail.com (2007, paperback, 208 pages)

An End to a Means

Why Didn’t You Call? A Peace Corps Panama Exposé - PB

What Do You Mean You Can't!: A Swift Kick in the Can'ts/ An Auto Godography