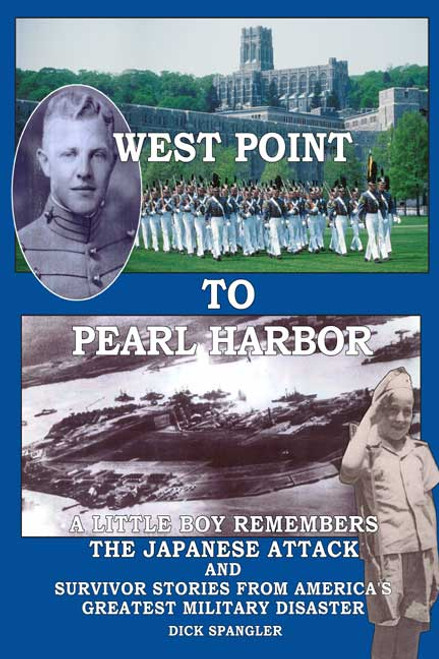 by Dick Spangler This is an extraordinary story of the Spangler family and the survivors of the Pearl Harbor attack, who experienced first-hand that fateful day of December 7, 1941. West Point to Pearl Harbor is inspired by two factors of great importance to the author: the fear that Pearl Harbors hard-learned lessons of 1941 will vanish, and his Fathers death in 1998. Dick Spangler reveals the private journals of his Fathers life as a cadet at the U.S. Military Academy in the late 1920s and 30s. Dick Spangler shares the intimacy of love letters written between his parents, incredible eyewitness accounts of surviving soldiers and sailors, and his own childhood memory of this most unforgettable moment in history. The stories are so vividly told by survivors that the reader can experience the true feelings of these courageous heroes who were forced to participate in the horrifying event. There is no truer way to learn history. This book commemorates in an enduring manner those who were there at the start of World War II on American soil. Readers unfamiliar with the motto: REMEMBER PEARL HARBOR will no longer forget. ABOUT THE AUTHOR Before becoming a fulltime writer, Dick Spangler was a well-known radio/TV anchorman in California. On radio, his Spanglers World interview program has been syndicated across the nation for twenty-five years. He has won five prestigious Golden Mikes in the broadcast industry. Spangler is also an award-winning writer, whose published works include: Kung Fu: History, Philosophy & Technique, Five Fingers of Success, and Writers Talk. Son of a U.S. Army colonel, Dick was born at West Point Military Academy in New York. He currently resides in California with his wife, Joan, and is the father of two sons, Paul and Shane. (2006, hardcover, 412 pages)
×

What Can You Get for a Dime?: The Story of Grandma and Grandpa Goettl