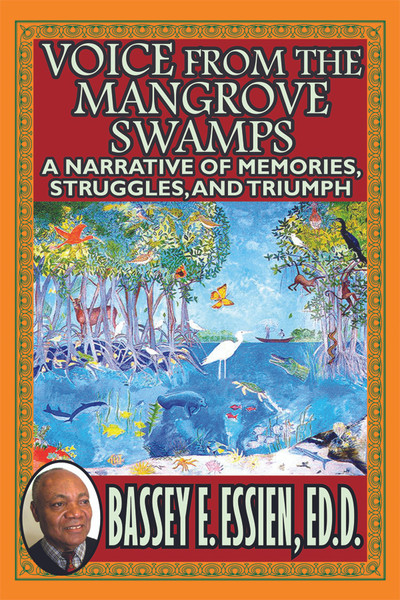 Voice from the Mangrove Swamps: A Narrative of Memories, Struggles, and Triumph
Bassey E. Essien, Ed.D.

Voice from the Mangrove Swamps shares the remarkable life story of Bassey E. Essien, Ed.D., from his dangerous job fishing as a young child in West Africa to his settlement and accomplishments in the United States. Essien was born in a small village in Nigeria. He did not attend school like some of his siblings. Instead he was required to work very hard at a young age, assisting his mother on her farm and his father on his fishing boat. This work was very risky, and he was lucky to survive several injuries despite the lack of modern medical care. Dreaming of a better life, he took the opportunity to move to the capital city of Lagos when he was a teenager. The environment was extremely challenging to him, but he managed to adapt and find a career in photography, starting as an apprentice. He was eventually able to open his own successful studio in Lagos.

But Essien still felt he was destined for something more and made the decision to go to America. He arrived in Washington, D.C., where he struggled to make ends meet as he put himself through school. Despite the hardships, he was convinced that education was the key to success. Starting with his G.E.D., he eventually earned a bachelor's degree, master's degree, and even a doctor of education (Ed.D.) degree.

Aside from his educational endeavors, this narrative also describes his family life. He moved to Albany, New York, after marrying his wife, Elizabeth, and there they raised four daughters. He emphasized the importance of education, as exemplified in his daughters' achievements.

Essien hopes his book will serve to enlighten people about the struggles of many children throughout the world. He knows he is one of the lucky ones who was able to overcome his traumatic beginnings and discover a better life.