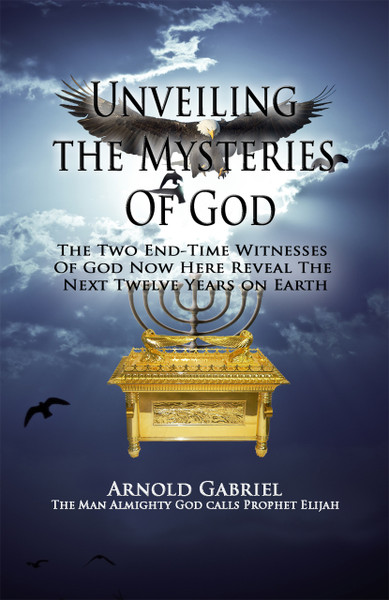 Unveiling the Mysteries of God: The Two End-Time Witnesses of God Now Here Reveal the Next Twelve Years on Earth
by Arnold Wasserfall

This condensed book has been compiled of twenty-four books. Each book was given directly from Almighty God's Holy Spirit to His Servant Arnold Gabriel, whom He calls Elijah. The book takes you from the past, to the present and into the future. The prophet takes you beyond the grave and reveals mysteries, which the Lord God has shown to him.

Arnold Gabriel reveals the full forthcoming twelve to fifteen years on the earth. He has met and seen the Lord on numerous occasions, has been to the center of the earth, and has seen countless millions of souls in prisons waiting for the great day of Judgment. He has prophesied to many nations, even the full happening of Zimbabwe from 1998. Word for word, all has come to pass even foretold only God would take President Mugabe out. He prophecied Cape Town and Los Angeles will be under the sea in these years, and also many islands.Every human on the planet will be affected.

About the Author: Born in the city of Cape Town South Africa, Arnold Gabriel was called at birth to be a prophet called Elijah. His travelling Ben Sheba Ministries trains and equips thousands of people across nations in the work of the Lord. He leads small groups on tours of the Holy Land in Israel,where he takes prayer requests and goes into the desert to pray. Each day, he spends many hours walking alone with God. Most nights he is visited by the Lord.