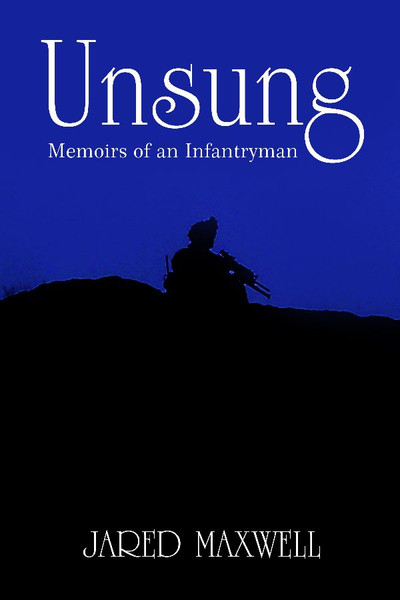 Unsung
Memoirs of an Infantryman
by Jared Maxwell

Even in our appearance, the apathy was starting to become apparent, as we all had already accepted death and just continued to do our jobs and wait for our numbers to be up, hoping it would be quick.

At a time when the country was focused on Iraq, a brave few were enduring life in the Valley of Death, the Korengal Valley, Afghanistan. Jared Maxwell, a U.S. Army infantryman, articulates the darkness of war in a poetic memoir that speaks of brutality, cruelty, and the ruthlessness of war.

From graphic memories of wounded, dying comrades to painfully eloquent perspectives on the hidden wounds of war, including posttraumatic stress syndrome, Jared Maxwells cathartic memoir is a glimpse into the horrors of war, as well as the touching relationships and permanent bonds formed between men who were fighting a largely unknown and misunderstood war.

Unsung is about finding your way back from hell, from the brink of death, and from the brink of insanity. It is about escaping death, escaping the nightmares, and finding your strength, even when your mortality is staring directly into your eyes. And it is about valor and the pursuit of victory, even when victory is as distant as hope. As Maxwell so beautifully expressed, Death. We found it, we created it, we endured it, and we braved it.

After experiencing the horror of the September 11 attacks in his high school senior year, Jared Maxwell enlisted in the U.S. Army and spent the next nine years in service to his country.

Between March 2006 and June 2007, Jared fought on the frontlines in a heavily forested, mountainous area of Northeast Afghanistan. Unsung Memoirs of an Infantryman is a first-person account of this time in his life and of the history and stories behind fighting in Afghanistans deadliest province as a young man. Jared also details his deeply personal account of developing posttraumatic stress syndrome due to three tours in combat.

Although originally from New York, Jared has spent most of his life as a Florida resident. Upon leaving the military in 2011, he began attending college and is currently a college student and aspiring novelist. Unsung is his first novel.