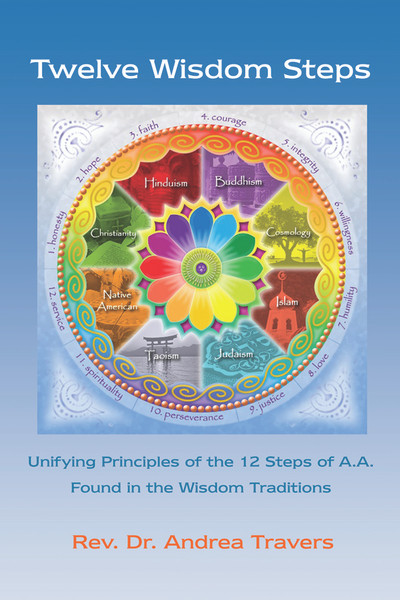 Twelve Wisdom Steps: Unifying Principles of the 12 Steps of A.A. Found in the Wisdom Traditions
by Rev. Dr. Andrea Travers

Beneath the well-known twelve steps of Alcoholics Anonymous (A.A.) are concealed the universal principles of spiritual practice as they are expressed in traditional religions and wisdom traditions; including Buddhism, Christianity, Cosmology, Hinduism, Islam, Judaism, Native American Spirituality, and Taoism. This wisdom expressed itself in a 20th century movement known as A.A. The purpose of this book is to ensure that seekers from all faith traditions have an opportunity to realize and appreciate the universality of transformative spiritual practices. We humans share common ground today, despite cultural and superficial differences.

In Twelve Wisdom Steps: Unifying Principles of the 12 Steps of A.A. Found in the Wisdom Traditions, Rev. Dr. Andrea emphasizes that amid all the seemingly unique and distinct religious expressions and forms there is an underlying binding truth wich is shared that promotes a universal experience.

This perceptive, engaging work challenges us to set our own traditional and cultural lenses aside and open ourselves to merging what we know with a new understanding of shared principlesat a time in our world when we are seeking to better understand each other and find common ground on which to relate.

Rev. Dr. Andrea Travers was born in New York, where she was also ordained in 2003. Aside from her doctor's degree in ministry, which she acquired in 2010, she also has a bachelor's degree in journalism and a master's degree in mass communication from the University of Oregon and University of Portland respectively. Married with three children, she now lives in the city of Wilsonville in Oregon with her family.