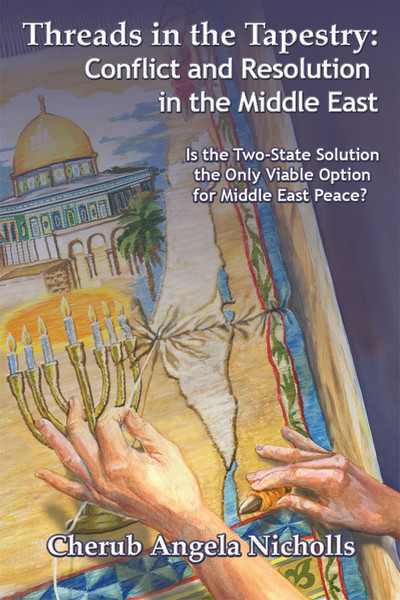 Threads in the Tapestry: Conflict and Resolution in the Middle East
by Cherub Nicholls

Threads In The Tapestry: Conflict & Resolution in the Middle East can be simply explained in a love story.

God, the Great King, chooses for Himself a wife. Her name is Israel. This Great King loves His wife very much and would do anything to shower her with His affection. Like other husbands in a marital relationship, He provides for His wife a home. This Great King utilizes the skills and expertise of foreign labour to build His wife her home. After the labourers complete their tasks (they were the Kenites, the Kenezzites, and the Kadmonites, the Hittites, the Perizzites, and the Rephaim, the Amorites, the Canaanites, the Girgashites, and the Jebusites), He removes them from the country, so that His wife alone, may enjoy the splendour of His possession.Twice, because of His wifes unfaithfulness to Him, He sends her away from His house. Nevertheless, He remains committed to His lover and decides that He will be faithful and seek no sweetheart while healing takes place in His broken heart.After a long time, God, the Great King and husband of Israel, decided that He has punished His wife long enough, and He brings her back home: to Himself, His house and city. Her total adoration is all He yearns for. Though there are many other women in the street, trying to win His affection, He reserves His love for His wife alone. Leave Israel alone! Her King, with great power, will rescue her from the world. This is a must read!

Cherub Angela Nicholls served as a career diplomat for Guyana at the United Nations, and also as an intern at the United Nations. Her diplomatic career helped open her eyes to the Arab-Israeli conflict. No longer in her countrys service, she has since become an advocate for Israel, in which she is dedicated to providing insights to the conflict from the standpoint of the God of Israel.