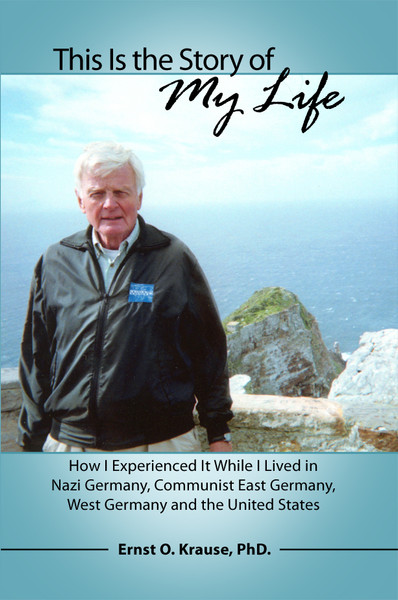 This Is the Story of My Life: How I Experienced It While I Lived in Nazi Germany, Communist East Germany, West Germany and the United States
by Ernst O. Krause, PhD.

For many people, stories of life behind the Iron Curtain during the Cold War may now appear as strange curiosities amid the Internet age. Equally for many, though, those strange curiosities were harsh, only too real realities of a mode of existence whose daily concern is how to survive yet another day.

Ernst O. Krauses life is one such story. Amid the turmoil of German defeat in World War II and the division of the country into communist and democratic zones of influence, Ernst Krause depicts how the resulting division has affected lives throughout the nation, vividly recounting the loss of social status, modes of living, and the general tragedy among the populace, along with the political apathy that met it across the western zone.

Surrounded by the often grim upheavals in his country, Ernst trudges on with his passion to make a life for himself, at the same time chronicling his deep observations for posterity in this, his story.

Always, Krause endeavors to follow the advice of his Prussian grandfather: When you are asked to perform a task, execute it the best way possible. Be doubly careful when no one is watching, because that is the time when most people get sloppy.

Born in 1935 and a native of Germany, Ernst O. Krause, PhD is a longtime resident of Emerson, New Jersey. He received primary and secondary education as well as a traditional German Apprenticeship Program in Business from his home country. Unable to pursue further education and professional advancement in Germany, he left for the United States in 1956, where his industry and natural hunger for knowledge led him to positions of responsibility as well as a PhD degree. Ernst is married and has three children, all of whom with advanced degrees and lead lives that any parent could be proud of.

A Path to Learning and Literacy: Study Guide for Secondary Students and Parents (Second Edition) - eBook

The Honest Life of a Liar (PB)