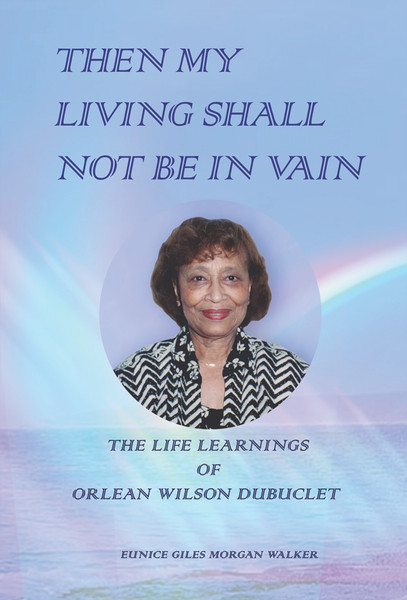 Then My Living Shall Not Be in Vain is the memoir that covers the life-learnings and personal experiences of Orlean Wilson Dubuclet over a period of ninety-six years. It tells of how a simple mantra of “Where there is a will, there is a way” coupled with God’s favor can make dreams come true. The book is filled with “pearls of wisdom” as she relates what she learned at pivotal points in her life. She shares her childhood experiences of growing up in segregated Fort Worth, Texas in the early 1930s and as a fun loving teenager in Los Angeles during the late 1930s and into the 1940s. She also shares her encounters with racism both subtle and overt, and the hurt of losing a dear friend to a Japanese internment camp.

She recounts sexual harassment on the job in the fifties, the highs and lows during marriage, and parenting experiences and challenges during married life and as a single mother. The attitude of “I am my brother’s keeper” started during early childhood years and continued in different ways into adulthood. Orelean provides evidence of this when talking about her 83 years as a contributing member of her beloved community and as a proud Los Angelano. She also talks about the founding of The Cooperettes, an organization that helps delinquent youths in the fifties and her dedication and commitment to the community through her work on the Unity Project which focused on creating new black business ownership in South Central Los Angeles following the Watts riots.

She proudly shares how she finally achieved her childhood dream of owning and operating a specialty women’s dress shop and ends by highlighting the importance of remaining relevant even in retirement and the blessings of always being in “God’s Favor”.