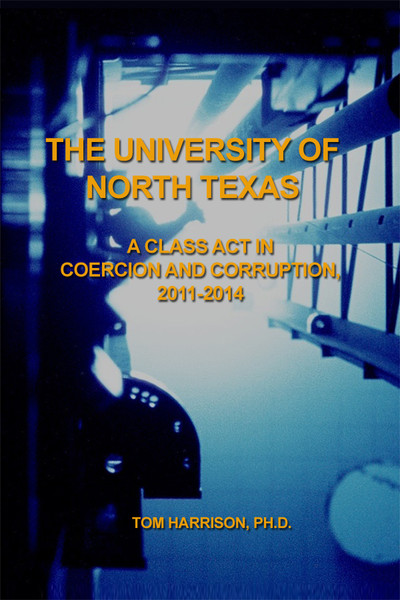 The University of North Texas
by Tom Harrison, Ph.D.

The University of North Texas chronicles the duties and responsibilities of a Radiation Safety Officer (RSO), of which very few readers are familiar. The book addresses the work the RSO must perform specifically in this case for an institution of higher learning to keep the faculty, staff, students, and its personnel in general protected from the hazards posed by the use of radioactive materials and ionizing radiation machines, i.e. X-ray machines, which are strictly governed by both Federal and State Regulations. Violations of these regulations will result in penalties to the institution in question that must be addressed and corrected in a timely fashion to assure that the institutes personnel can conduct their medical, educational, and research programs in a safe manner and not deliberately be placed in harms way.

The University of North Texas deliberately and knowingly disregarded and violated its licensed conditions required in order to operate their licensed programs safely. Their actions resulted in both Federal and State regulatory violations via the University of North Texas Radioactive Material License conditions imposed by these agencies. The Senior Administration did this illegally to achieve preemptory financial and administrative goals by covertly ignoring and overriding Federal and State regulations.

The author further describes in great detail the violations perpetrated by this University of Federal, State, and Postal codes to materialize these goals at the expense of the safety of their personnel.

Tom Harrison, Ph.D. was born in Columbus, Ohio, 31 March, 1939. He comes from an Army (Dad) and Air Force (Stepdad) heritage, both of whom fought in World War II, the Korean War, and Vietnam. He entered the University of Michigan in 1957 but took his sophomore year off to play around Europe in search of a more rounded education. He then returned to the University of Michigan, graduating in 1964 with a degree in Engineering Physics after accumulating nearly 184 hours of an even more rounded education. He completed his formal education at the University of Missouri-Columbia with his Master of Science and Doctoral degrees in Nuclear Engineering, writing a dissertation in Nuclear Astrophysics.

Lord of the North - eBook