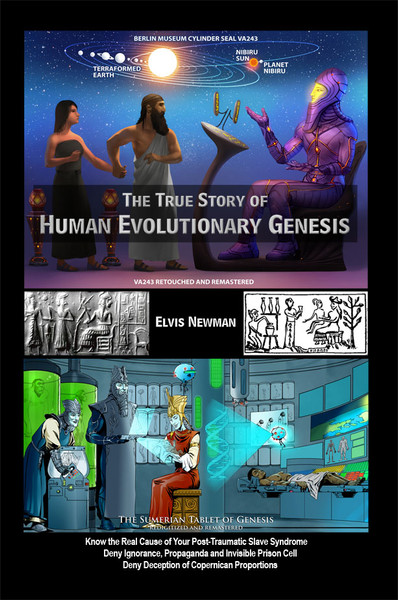 The True Story of Human Evolutionary Genesis
by Elvis Newman

No doubt, history is littered with theories and beliefs that not only proved to be wrong in the end, but also costly as far as the human search for truth and development is concerned. The view that the Earth was the physical and the biological center of the Universe was one such failed theory, one that cost many famous scientists most of their lives, and held back societies everywhere for decades or hundreds of years behind what is now considered a given truth.

In the current work under consideration, religion and evolution theories come under scrutiny in light of recent scientific facts that dispute their most important claims about the origins of the species. In The True Story of Human Evolutionary Genesis, Elvis Newman presents both astounding facts and findings about the human genome, as well as paradigm-shifting theories emanating from Zecharia Sitchins work around the Sumerian clay tablets.

A futurist researcher with an MBA, Elvis Newman has worked as a ghost writer and researcher for well-known new age and futurist gurus of our times. He professes to insatiable interests in humanitys progress into the future and past lessons from history, because we all know that our most outrageous imaginations of the past will quickly become our most indispensable realities. His website is www.ElvisNewman.com.