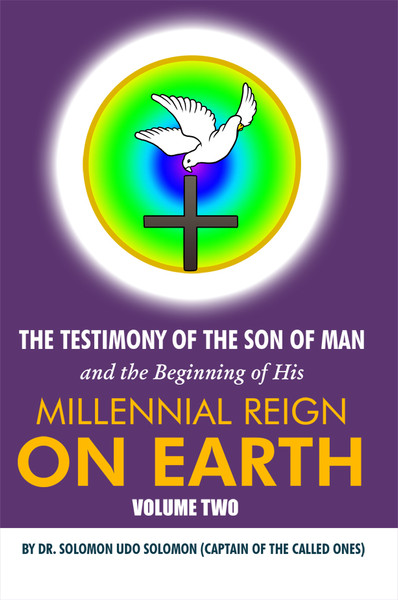 The Testimony of the Son of Man and the Beginning of His Millennial Reign on Earth Vol. II
by Dr. Solomon Udo Solomon

The theme of The Testimony of the Son of Man is the restoration of the everlasting Gospel of the Kingdom of God on Earth, as was brought down by Yeshua the Lamb of Yahweh, for the redemption of the entire humanity. The impetus to write this series of books came to the author by a dream of inspiration. In that dream, Dr. Solomon Udo Solomon was directed to preach only what Jesus taught the world.

Dr. Solomon went through the Synoptic Gospels first, then the Epistles of the accredited witnesses, and finally the Book of Revelations. Dr. Solomons understanding was quickened. Finally, he decided to read the letters of Saul of Tarsus. He saw a whole world of contradictions from what Jesus, as the Son of Man, taught the world. Dr. Solomon then understood why the Lord laid emphasis on what He Himself taught the world, as well as the very essence of the mandate given to him. Dr. Solomon understood the need to inform the world of his revelations. This is in keeping with what Jesus Himself said: And this Gospel of the Kingdom shall be preached to all nations as a witness against them, and then shall the end come.

The Gospel of the Kingdom, which is the Gospel of Lawfulness and Peace, is what Jesus Himself taught the world in His words, examples and customs. The present messages in churches and other organizations are composites of wheat and tares, because of their choice to flout the Lords order in the Gospel of Matthew, Chapter 28, verse 20, under the purported inspiration of their false prophet. This work is in strict consistency with the mandate that was given to Dr. Solomon. The readers will know that there was a gross distortion of the Mission of Yeshua the Lamb of Yahweh to the world, especially His actual work of redemption. The cross of the murderers, which is being extolled, has no contribution to make for the redemption of mankind.

This work is intended to free those who care to accept it from the sin of accomplice, which has constituted a plague to the whole world. The false information peddled by the false prophet, will eventually be discarded to pave way for the New World Order, which rests squarely on what the Lamb of Yahweh bequeathed to the world. This is the much-needed foundation for the Lords return to set His Millennial Government on Earth. This work shall awaken the consciousness in the elects to preach only what the Lord Himself taught the world, notwithstanding the temptation to believe and propagate the unscriptural letters of Saul of Tarsus.

The second son of the family, Dr. Solomon Udo Solomon was born on October 3, 1949. He obtained his First School Leaving Certificate in 1962, West African School Certificate in 1972, a DVM in 1982, and an MBA in 1992. He set up Pillar of Truth Covenant Church in 2002 and started his literary work in 2003. Solomon admits that his work in veterinary medicine has helped him articulate his ideas. He is retired chief veterinary officer in his state. He is married with children.