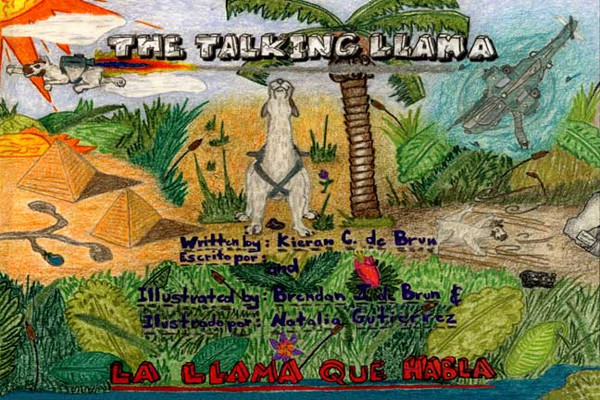 by Kieran Christopher de Brun
Illustrated by Brendan Joseph de Brun Written in both English and Spanish to promote the appreciation and interest in bilingual education, The Talking Llama (La Llama Que Habla) tells the tale of a llama who becomes separated from his family during a storm and the amazing adventures and colorful characters he encounters after a river carries him away. As he travels, the llama meets fairies who give him the power to talk and fly. He encounters friendly people as well as evil people who want to hurt him. The Talking Llama even falls in love and starts a family, but thoughts of his parents lead him to set out one day to find them. Will he find his way home, or will his parents be only a memory? Kieran Christopher de Brun and illustrator Brendan Joseph de Brun use a touch of humor to highlight compassion, teamwork, and love blended with an understanding of the Hispanic culture to capture the imagination as well as to educate and motivate in this delightfully entertaining childrens book. ABOUT THE AUTHOR AND ILLUSTRATOR Raised in Mexico City, brothers Kieran Christopher and Brendan Joseph de Brun entered kindergarten at Eton School and graduated in eighth grade with the academic requirements for the Mexican SEP and the International Baccalaureate programs. Kieran is an advanced PADI certified scuba diver. Brendan is a licensed student pilot. Both brothers attend Phillips Academy at Andover, Massachusetts. (2005, paperback, 32 pages)