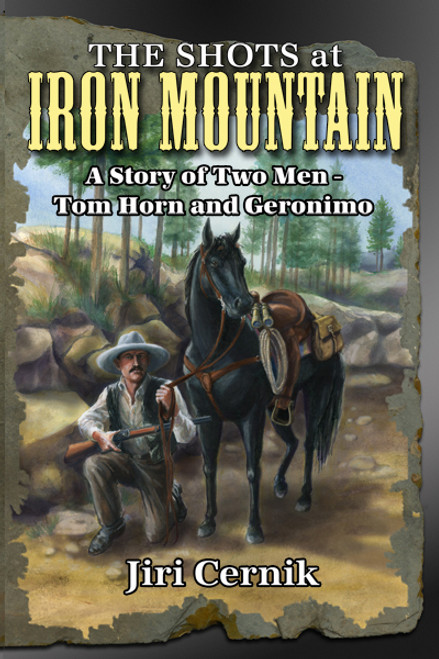 The Shots at Iron Mountain: A Story of Two Men Tom horn and Geronimo
by Jiri Cernik

The murder of fourteen-year-old Willie Nickel caused an uproar in southern Wyoming and the public demanded finding the culprit and appropriate punishment. About seven months later Tom Horn, a cattle detective hired by the big ranchers, was arrested and charged with this crime. His lawyer, John W. Lacey and a solitary reporter from Denver, are convinced that Horn is innocent and they try their best to prove that the whole trial is actually a conspiracy by small ranchers, mostly rustlers, to silence Horn once for all. However, in spite of the fact that defense refuted most of the prosecutions arguments and testimonies, the jury found him guilty and recommended the capital punishment by hanging. The story is based loosely on historical facts and legal documents and it is also supplemented by Chatting with the Chief of Indian Scouts to provide some insight in Horns background. The Shots at Iron Mountain illustrates the conflict between an individual and rapid societal changes which he cannot or perhaps does not want to accept. The story also highlights politicization and abuses within the judicial system which favor certain special interest groups - a phenomenon too frequent in modern history.

Western author Jiri Cerniks The Shots at Iron Mountain: A Story of Two Men - Tom Horn and Geronimo is an action-packed Western novel that brings voice to many of the Wests best-known characters, whose violent lives ended on the battlefield, in prison or at the end of a hangmans noose.