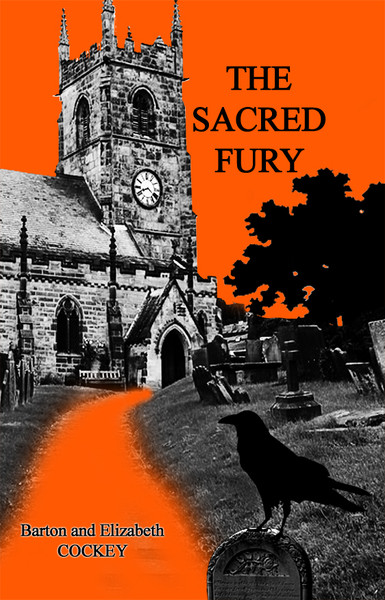 By: Barton and Elizabeth Cockey

The Sacred Fury is a literary work of social criticism, a tale about modern-day deviltry.

The story surrounds Dylan and Sidney Greene, a newly married couple who live in Baltimore. Dylan, who is the Junior Editor at a local newspaper, is enticed to join an organization called G.O.O.D. whose aim is to control all human life. But Sidney begins having bizarre prophetic dreams about graveyards, disembodied spirits from the past and macabre visions of Samurai armor that comes to life. Meanwhile, Dylan is drawn inexorably into the sinister organization where he realizes his job is to write the news before it happens.

At the same time, Sidney seeks an explanation for her dreams from a local fortune teller. It is here where she learns the truth about G.O.O.D. and their plan to excavate the grave of Edgar Alan Poe in search of the potion for eternal life.

Barton and Elizabeth Cockey live on the east coast with their four Pekingese. Both are retired from the medical profession where Barton was a diagnostic radiologist and Elizabeth was an art therapist.

The Cockeys have also authored several other books: illustrative histories

detailing life in the past though storytelling and original paintings. They also researched and compiled Untold Stories of the Battenkill, an oral and written history of the most famous trout fishing stream in America. The Sacred Fury is their second novel.

Wonders in the Sacred Valley of the Incas: Pisac to Machu Picchu - eBook

The Runs and Errors of a Baseball Mom's Life