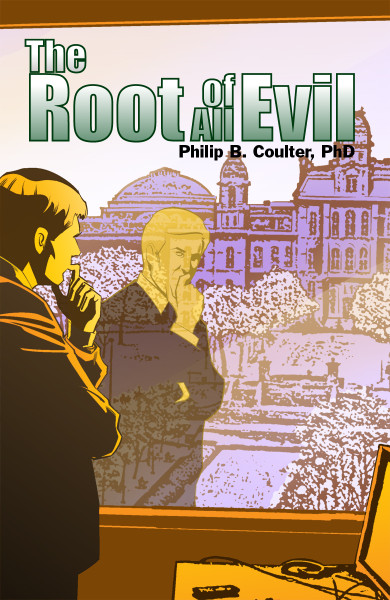 The Root of All Evil
by Philip B. Coulter, PhD

When Dr. Andrew Cameron begins his new job as Executive VP at Alpha State University, he discovers serious problems. Greed, the root of all evil, has increasingly entered the university and slowly changed the institutions purpose from the enlightenment of students and society to the pursuit of power and profit for the economic elite. The meetings of the president and board of trustees of Alpha State University are dominated by corporate CEOs. Their official actions are often corrupt or even criminal, resulting in greater power and profit for them, but also in the deterioration of teaching and distortion of research.

Although the egregious practices Dr. Cameron uncovers are numerous, he is especially shocked by the universitys collusion with the pharmaceutical industry to submit fraudulent research, insider trading, threats and bribes to falsify government reports, and the failure to report a rape-murder of one of its students. Cameron must decide what to do blow the whistle and risk his career or enjoy the power and money.

The Root of All Evil carries on the American tradition of muckraking identifying intolerable problems in society and advocating reforms. Whereas journalistic muckraking documents the facts of particular cases, the muckraking novel seeks to present the general truth in more human and dramatic terms. Although a work of fiction, The Root of All Evil presents a frighteningly realistic account of recent trends in U.S. universities.

About the Author: Philip B. Coulter, PhD grew up in Kentucky. His interest in government and politics began at an early age when he first served as a page in the U.S. Senate during 1955-56. In 1966, he earned his PhD in political science from Rockefeller College in the State University of New York at Albany.

For over forty years Dr. Coulter was a tenured professor in universities throughout the United States. When he became a dean, he devoted himself to establishing student and faculty exchange programs with universities in Europe and Latin America.

Dr. Coulter and his wife of fifty-two years now live in Frisco, Texas. They continue to travel abroad every year.