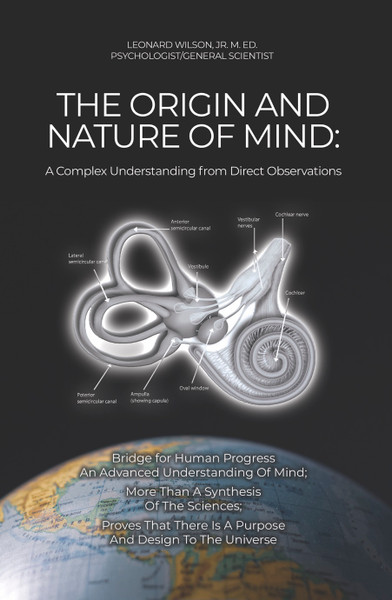 The Origin and Nature of Mind: A Complex Understanding from Direct Observations

The Origin and Nature of Mind: A Complex Understanding from Direct Observations explores the nature of the human mind from both a scientific and a biblical perspective. Delving beyond the wrongful assumption that mind equals brain alone, Leonard Wilson, Jr., M. ED., examines the mind’s connection with the body’s vestibule and nervous system.

Through a greater understanding of the human mind, Wilson hopes to better the human condition, easing the weight of mental illness on those afflicted and their loved ones.

A psychologist and general scientist, Leonard Wilson, Jr., M. ED., has a long and successful career in the field of scientific research, and it is ongoing. His interest in the human condition began at the age of four while participating in Sunday School Classes. His confidence was greatly increased after successful experiments, including the groundbreaking research with the prepubescent physiology.

While doing research he has worked in the fields of education at every level, mental health, and nearly twenty years in the penal system. His work hasn’t gone without recognition, being featured and acknowledged in such places as the New York Academy of Sciences, the New England Journal of Medicine, the American Association for the Advancement of Science, and more.

The Origin and Nature of Mind - eBook

The Origin and Nature of Mind - PB

Little House on the Fairway: Short Story Series in the Life of David O’Toole - eBook

The Devil: The Changing Hangovers

Use Your W.O.R.D.S.: Weapons Over Real-life Decisions and Situations

Amber Lee and the Daylight Medallion

D.I.F.Y. Do It for Yourself: A simple guide to living the life you deserve