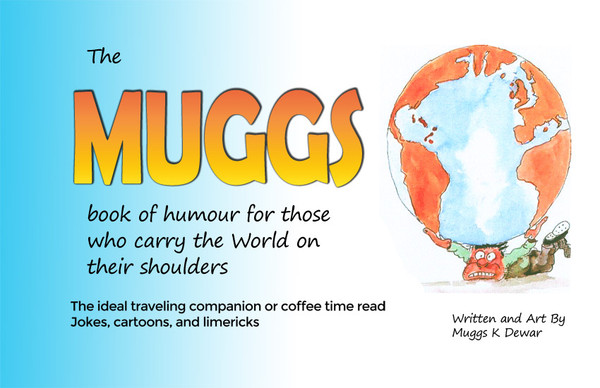 Want a laugh? This is a wonderful compilation of jokes that are sure to tickle your funny bone and brighten even the worst of days. Whether you are feeling blue or just need to giggle, there’s a story or joke to get the job done and lift your spirits. Topics range from travel to romance, puns, and funny anecdotes.

Making the world a happier place one page at a time, there are little quips, short stories, and humorous cartoons for everyone. Browse through The MUGGS Book of Humour for Those Who Carry the World on Their Shoulders: An Ideal Coffee Time Read and prepare for lighthearted laughter.

Muggs K Dewar is an eighty-eight-year-old with a very interesting and adventurous life story. As a teenager, not only did he catch diphtheria, but Muggs also experienced the bombings in Surrey, in the south of England, while on the way to choir practice.

In the mid-1940s, Muggs joined the Royal Navy and spent much of his time at HMS Heron, a premier fleet air base. During this time, he met the love of his life and has been married to her for more than sixty years!

Muggs found himself drawn to the sea, holding careers in both the UK and Greece. Muggs and his wife purchased a Ginn Fizz—not the drink, but large yacht—and sailed to the south of France where they reside today.

Those Who Wait - eBook

The Most Important Thing to Have

The Mist of Winter