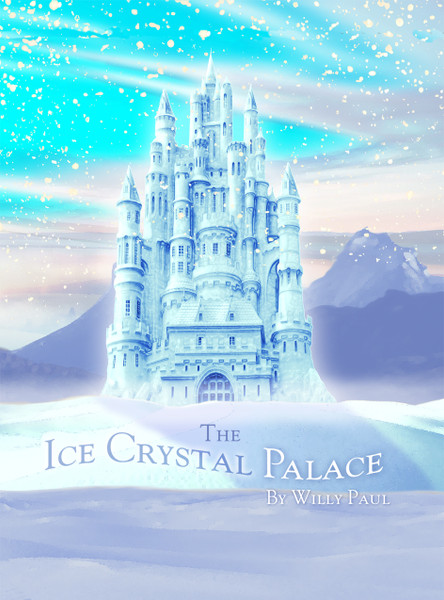 The Ice Crystal Palace is a story about the most beautiful kingdom IN THE WHOLE WIDE WORLD! And this is why... You see, up around the North Pole, it is very, very cold outside all year long! So the people living there had to think of new ways to build things and have fun, too!

The Ice Crystal Palace and all of the walls surrounding the kingdom were built out of sculpted ice. Some of the blocks were as big as a small house and some were as small as a grain of sand. But they all had a specific purpose - to reflect the suns rays all around the kingdom. The citizens living there knew they only had a few hours of precious sunlight each day, so they wanted to make the very most of it.

The suns rays would stream into the kingdom and bounce off the sculpted ice back and forth, creating the most beautiful colors in the rainbow! This would last until the sun went down each day. And every night, the people would build a big fire in the middle of the town and, once again, watch the colors shoot through the air, reflecting off all of the ice crystals from building to building and wall to wall.

It was a most beautiful sight to behold, and all of the children loved to chase the rainbows as they bounced around all over the square. The rainbow games were so much fun, and all of the children loved to play every night until it was time for everyone to go home, go to bed, say their prayers, and then fall fast asleep in their warm, soft beds. Everyone agreed the Ice Crystal Palace was by far the most beautiful kingdom anywhere IN THE WHOLE WIDE WORLD.

Willy Paul resides in Spring Valley, near Dayton, Ohio, with his wife, Annette. Together they share six children: Sarah, Laura, Julie, Ben, Sean, and Tedi. They live on a small farm with sixteen acres, which includes cows, hogs, chickens, and honeybees. Willys hobbies include horticulture, landscaping, and trees. Willy is a restaurant owner who has a B.S. in Finance and Banking, which he earned from Wright State University.

The Hopes and Encouragements of a Woman