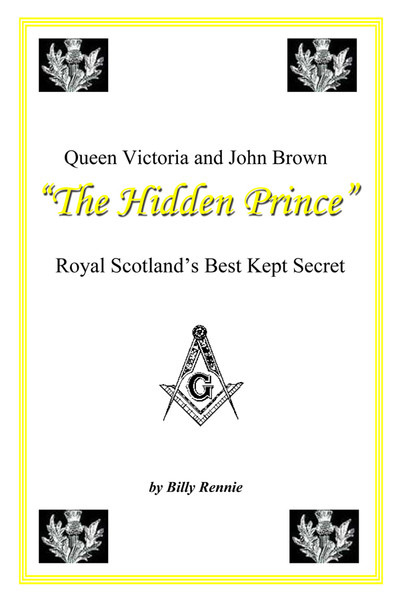 The Hidden Prince
by Billy Rennie

In The Hidden Prince, Billy Rennie presents compelling information passed down generation to generation regarding the secrecy surrounding a relationship between the late Queen Victoria and John Brown, who was most likely the love of her life. Although this tale is not a new onein fact, there was a film made on the storyRennie provides information that begs to solidify the possibility of the secret marriage between them and the birth of a Hidden Prince, who was raised by another family.

What contributed greatly to the authors interest in this love story is the fact that his beloved late wife was a descendent and had seemingly credible bits and pieces passed down through her family over the years; he initially wanted to help her find the truth behind the family history and tails/whispers passed down through each generation, which Bill witnessed himself. It was based on a graveyard visitation with Old Jock Hanton as he broke his heart and told of his family story. Sheena, Bills wife, wanted to explore in more depth, as she also knew of all the family tales.

If the mystery proves to be true, the lives of at least two families were forever changed. One might question what historical events might have been altered if this relationship had been brought to light. Of course, thats something we will never know.

A Scottish citizen residing in Aberdeenshire, William Milne Rennie and his beloved late wife, Sheena, are parents to two sons, William and Michael.

Brought up on the family farm, he went on to train jumping horses in the US, Canada, Newfoundland, and the UK, himself competing and beating some of the best. Married to a registered nurse at the age of twenty, he drove big equipment on the pipeline and then became a surveyor and assessor in Scotland prior to retiring due to ill health.

His outside interests included producing Scottish culture music on WAVES radio, and involvement in a BBC series called Scotlands Greatest Mysteries. Highly regarded as a local historian in NE Scotland, he is a proud and distinguished Scotsman.

The Homebuyer's Guide to the Foreclosure Market