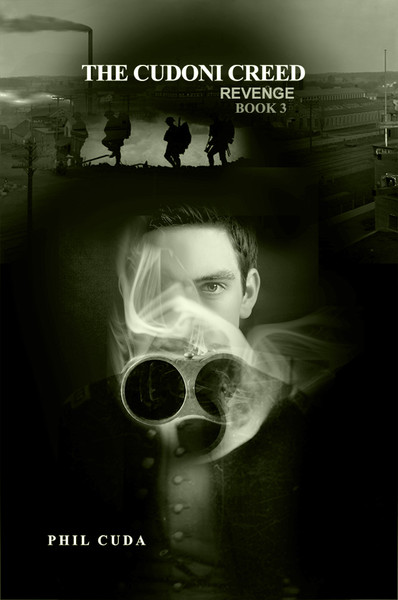 The Cudoni Creed: Revenge - Book 3 is about a man and his brothers who realize they are not satisfied with the opportunities available in Italy and decide that they should join their cousins in Pittsburgh. After a few years in Pittsburgh, Filippo returns to Italy to marry his new love, but after a deadly fight with a mafia suitor, he finds himself in a deadly struggle with the mafia mans father, who seeks revenge for the death of his son. Filippo finds, however, that life in Italy, even married, does not provide rewards, and he returns to Pittsburgh. There he renews his struggles, fighting the Cosa Nostra. Unknown to him, his old love in Pittsburgh has borne him a son, but her husband is about to die and does. Filippo at first resists his desire to make love to her, but eventually succumbs. During these fierce and many struggles, one of the brothers is murdered by the Cosa Nostra and the Cudoni Creed demands revenge.

Phil Cuda was born at the end of World War II in Italy. His father chose to immigrate to Australia rather than to America, where his father had spent many years. His family lived in a part of Italy where living standards were poor, and so his father chose to move to where he had family but could keep his Italian traditions and have hope for the future.

There are three more books in The Cudoni Creed series and six in total. Phil has written two other books based on two Australian Secret Undercover Agents who chase criminals around the world with a mission to exterminate them wherever and whenever.

Phil has had a successful business life but now has time to pursue a writing challenge.