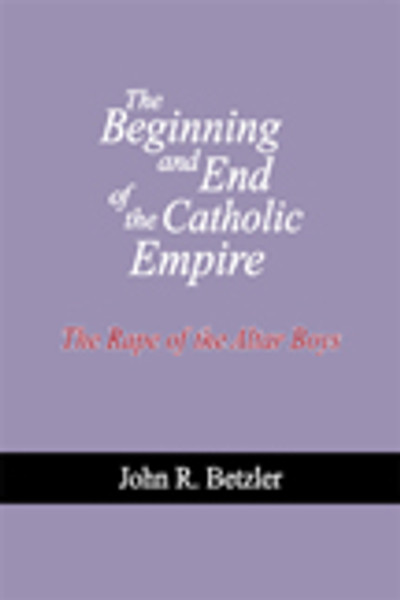 by John R. Betzler The Beginning and End of the Catholic Empire, The Rape of the Altar Boys is a striking book explaining John R. Betzlers unflattering opinions of the Catholic religion and its founders. Betzlers inspiration to write this book stems from his strong beliefs opposing the idea of the existence of God. According to Betzler, the greatest minds of all mankind do not know why the universe exists of when it will end. God defined by Christians, Muslims, etc., is ludicrous, and the only intelligent conclusion is that if He is all powerful and all knowing, He is an evil SOB looking down at misery, disease, and religious warfare. We should hold Him accountable. About the Author: A private entrepreneur, John R. Betzler is a 1950 graduate of George Washington University, and he pursued post-graduate study in physics, mathematics, and engineering at the University of Virginia, as well as American University. He also served in the US Army and is a licensed commercial pilot. The father of two sons, Mr. Betzler enjoys reading, boating, and poker. (2003, paperback, 42 pages)