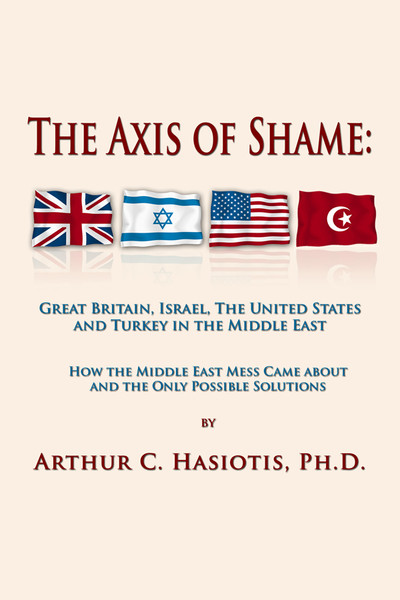 The Axis of Shame: Great Britain, Israel, The United States and Turkey in the Middle East
by Arthur C. Hasiotis, Ph.D.

One part Middle Eastern history, one part political expos, The Axis of Shame recounts the genesis of the state of Israel within the context of the historical background of Moslem-Christian relations and brings to light both the machinations of Great Britain in bringing Israel into being and the ongoing activities of the United States in maintaining Israel. It exposes the endemic corruption of the U.S. political system in allowing foreign policy to be dictated by wealthy and powerful lobby groups and calls for drastic reform of how America elects its leaders. In The Axis of Shame, author Arthur C. Hasiotis has created a manifesto for political change so U.S. foreign policy can be free from the corruption of lobby money and America may begin to make positive steps toward repairing its damaged reputation and relationship with the Middle East.

A Boston native, Arthur C. Hasiotis attended college at Boston University, received his masters degree from Columbia, and received his Ph.D. in Modern Chinese and Russian History from New York University. His doctoral dissertation, Soviet Political, Economic and Military Involvement in Sinkiang Province: 19281949, was published in 1987 by Garland Publishing. A father and retired businessman, Hasiotis enjoys reading history and traveling.