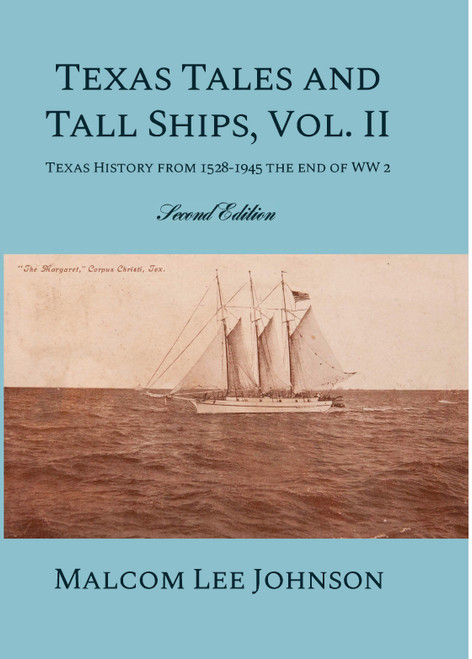 Texas Tales & Tall Ships is a well-documented book on the history of the region of the United States now known as Texas, covering the time period from 1528 when Cabeza de Vaca arrived to the end of World War II in 1945.

Malcom Lee Johnson was born in Midland, Texas in 1940. He grew up in Corpus Christi and attended Corpus Christi College Academy and Del Mar College. Later, he was employed as a draftsman by Humble Oil Co. and Tenneco Oil Co. making lease maps, sub-surface maps, cross-sections, and isopach maps. In 1961 he joined the Texas Archeological Society for twenty-five years and the Confederate High Command (Civil War Centennial). He also served in the US Army, mechanized infantry, and became a charter member of the South Texas Archeological Association, serving as Vice President and President. Additionally, he became a member of the Sons of the Republic of Texas, the Black Powder Brigade, The Sons of Confederate Veterans, The Sons of the American Revolution, the Gillespie County Historical Society (President and Life Member), the Kerr County Archeological Society (Vice President and President), the Fredericksburg Rockhounds (President) and the founder and first president of the Coastal Bend Archeological Society. In 1995, Texas Governor George W. Bush presented Malcom with a certificate naming him as an Admiral of the Texas Navy, and he is presently a Life Member and Admiral in the Texas Navy Association.

The Unheard Voices: The Pain that Follows You. The Tears that never fade. The Scars that Stay. The Words and pain that are here to stay.

The Animals and Their People: My Stories