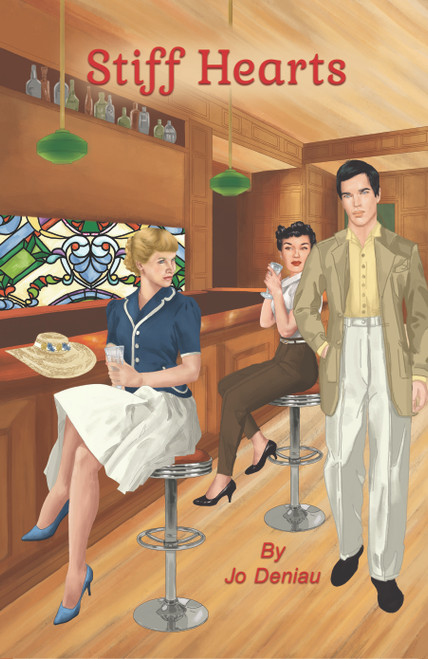 Jo Deniau’s debut novel is based on the adventures and mishaps of her mother in mid-1950s Greenwich Village.

At the end of twenty-year-old Gillian Rysert’s train journey from St. Louis to New York City in 1949, she believes she’s escaped her hillbilly mother’s legacy: some extreme physical code or language of survival transmitted by the blow of a fist on someone’s jaw or a gun firing far away in the woods.

Magnetized to violence by her mother and bereft of her father, Gillian no longer lets love in. So far, Gillian’s reserve has shielded her - from anyone who is not her late father.

But now Gillian’s surrounded by other Greenwich Village incomers suffering the aftermath of two World Wars and, like the penetrative reach of stained glass, they embolden her stiff heart to open. Among them: Latvian freedom fighter Jānis Dieviņš, Latina sophisticate Dolores Valencia, and the boas and pearls proprietor of Levitsky’s Treasure Trove.

Authentic relationship with these characters packs some risks though. Gillian could become collateral damage of her lover’s anti-Communist mission, destroy herself before she can stand fully in her power, and perish in the trap her mother sets for her back in Missouri.

Since her teen years, seasoned writer, editor, and college educator Jo Deniau has wanted to know why people believe and live as they do - and to better understand her mother’s mental illness. Having lived in a number of different states, the author now enjoys a tropical life, fifteen minutes from the nearest Gulf Coast beach in Florida. About Jo’s travels abroad she notes: “People in other countries reveal how our cultural identity is like a prism through which we interpret our personal reality. And also how, even with the diversity of our traditions, we all share an innate human need for connection... and freedom.”

Blessed be the Pure in Heart - eBook