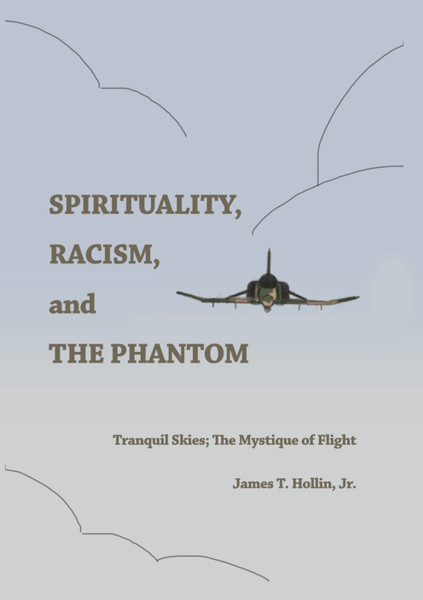 These memoirs and accounts present both a factual accounting of the revelations of the Spirit which sometimes unexpectedly occur while in flight and also, a reasoned, prayerful attempt to understand those revelations. Much of James T. Hollin, Jr.’s lifetime was spent recognizing that aerial flight can be used for many reasons, running the gamut from sky-diving, hot-air ballooning, low level sightseeing, the dropping of searing napalm on soldiers, med-evac flights, or entering a low Earth orbit in a space vehicle. Even more important, this has been the recounting of one person’s appreciation of, and sometimes bewilderment with, the goodness of Divine happenstance, or Fate, intervening in the most unexpected and timely circumstances.

The title provides an inkling of the wondrous and sometimes brutal activities of mankind in the sky.  Since the first powered flight by the Wright brothers in 1903, the air above the Earth has enveloped innumerable instances of lifesaving aerial exertions and ferocious warmongering.  The skies have been used for the benefit of, and also, selected destruction of mankind.

From personal experiences, and the bountiful history of flight, the author describes events that illustrate, in many respects, the nature of man. His interwoven memoirs include recitations of airborne bliss, nerve-wracking predicaments, and unexplained aerial phenomena. Centuries-old cultural and racial mores evoked personal conflicts which needed resolution within the author’s own perception of spirituality and aviation.

Often, a disastrous twist of fate will catch a person totally unawares. Such occurrences can cause apprehension, helplessness, or even terror, but frequently become immediately and unexplainably resolved. It is heartwarming when unseen forces, undefined by science or not fully articulated by religion, intervene in a lifesaving manner, especially in the sky.

The writer regards flying as a combined physical, mental, and spiritual immersion in the medium of air, whether piloting a gigantic airliner or a hang glider. An aviator, by virtue of being “up front,” should assume the role of a committed, principled leader, particularly when transporting passengers. It is an inspiring quality that is sorely needed in any environment.

James T. Hollin, Jr. is a former military aviator and experienced airline pilot. J.T. was raised in the quiet, desert town of Yuma, Arizona during the 1950’s and 1960’s. A graduate of the University of Arizona, he received a B.S. degree in aerospace engineering. Captain Hollin flew as a U.S. Air Force pilot for almost five years, including a six-month tour in South Korea, and a year combat tour as a Forward Air Controller, flying over South Vietnam, Laos, and Cambodia. Later in his career, Captain Hollin flew as a Delta Air Lines pilot for thirty-one years. With the airline, Captain Hollin flew several aircraft types, including the DC-9, Convair-880, the Boeing-727, -757, and -767, the Lockheed L-1011, McDonnell-Douglas MD-11, retiring as a Boeing-777 Captain.