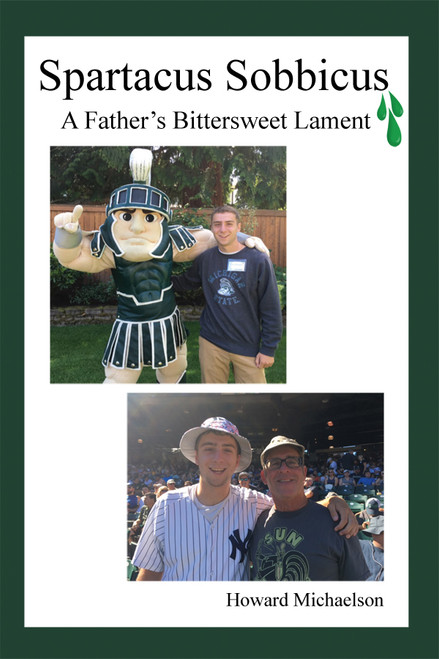 Inspired by a jolt of homesickness after his oldest son Chase heads off to college, Howard Michaelson composed Spartacus Sobbicus—a spirited ode to the first two decades of Chase’s life.

Mostly revealed through letters to Sparty “the wonderful walking bobble-head mascot of Michigan University”, Howard tells Chase’s story from early childhood where a precocious understanding of sports and music began to bloom and continues right up to their first exciting ballgames together after the big move. Though Chase’s festooned upstairs bedroom is strangely silent and empty while he is away in the Land of Sparta, the memories contained there—and here—are definitively loud and full.

Howard Michaelson was born and raised in simpler times in a tropical paradise called Miami, Florida. Seeking a change in environment for college, he winged it north to Syracuse University in order to experience snow and certainly got more than a full shovelful for several years! When the “Hippie Van” at last headed west, Howard climbed aboard and landed in beautiful Seattle, Washington, where he still resides.

A true aficionado of music and pop culture, Howard spends a great deal of his spare time collecting both new and old “editions” for his unique cabinets of curiosity. Along the way, he had many amazing adventures traveling in the jungles of South America, the forests of the Pacific Northwest and across this great nation of ours as an innovative trailblazer in the foodservice display industry. However, no adventure was greater or more challenging than twenty-first century fatherhood.