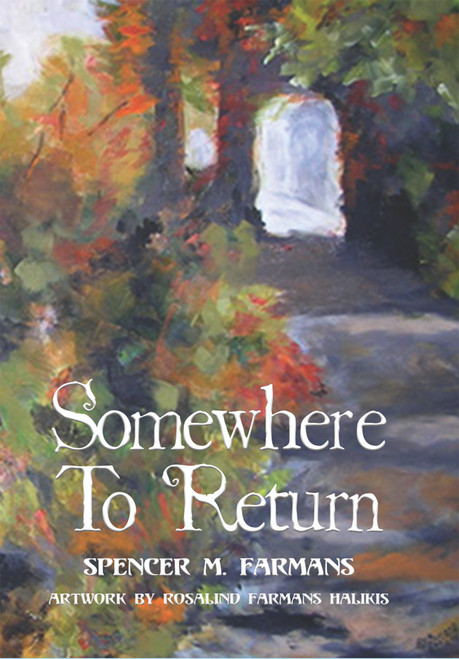 Somewhere To Return contains nine engaging tales from the mind of Spencer M. Farmans, a lifelong Midwesterner from the city of Downers Grove, Illinois, a suburb of Chicago. The book fascinatingly examines people and landscapes, which span a time from innocent childhood to the reality of old age. The stories independently work as short stories yet are also an integral part of the complete novella.

In “Mister Billy,” the book begins with a provocative observation of the book’s protagonist, Adam Franks, an eight-year-old little boy’s fear of a paralyzed neighbor, and how his fanciful illusions are about to dissolve into the reality of truth.

“Of Fathers and Sons” addresses the terror that many people harbor about the obstacles in the wake of personal dreams (a central theme in the book) brought about by parents.

The dilemma of holding to one’s dreams or selling out to the practical world of a safe survival mark the compelling lessons in “A Touch of Magic”, “A Diamond in the Ruff”, “First Love”, and the title of the book, as well as the title of the last story, “Somewhere To Return”.

Also, much attention is paid to the importance of other human beings’ great influences as heroes or mentors upon the protagonist’s search for meaning and his attempt to fulfill dreams.

Finally, interspersed throughout the book and accenting the stories are the graceful and beautifully colorful oil paintings of Rosalind Farmans Halikis.

Spencer Farmans is the author of four previous books of poetry, essays, and editor of two collections of short stories. He has published feature articles in the Chicago Sun-Times and The National Herald newspapers. His books include Thirty-Three Poems (2001), Statues and Trees (2006), Is That What I Mean? (2012), and Vignettes, Meditations & Memories (2018). Since 1998 he has taught fiction, composition, film, and poetry at Moraine Valley Community College in Palos Hillis, Illinois. Spencer lives with his wife, Janet, in Downers Grove, Illinois.

Rosalind Farmans Halikis was born in Weirton, West Virginia and received her Bachelor of Science degree in Medical Technology from the University of West Virginia and an internship at Michael Reese Hospital in Chicago. After working at Mercy Hospital in Chicago, she moved with her husband, Dr. Michael Halikis, to California. While working at the Harbor UCLA laboratory, she took adult education classes in art which helped to accent a lifelong passion in oil painting. She continued her painting and worked at USC in the Advisement Office of Letters, Arts and Sciences and as assistant Director of Academic Relations. She has been painting ever since her youth. Presently, she lives in Palos Verdes Estates, California near her three children, Dr. Nick Halikis, Maureen Halikis, Georgene Halikis Mitsanas and grandchildren, Harrison, Triana and Michael.

Finding Me In You - eBook

The Honest Life of a Liar (HB)