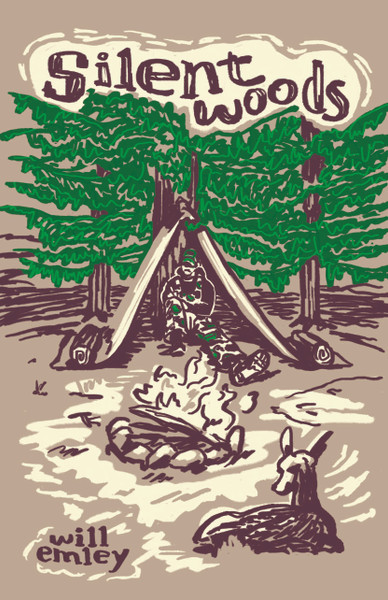 After waiting for a half hour, seeing no sign of Will, Darwin decided to walk in and check some of the stand locations.  He had seen the locations on the maps that Will diligently maintained.

Darwin knew that there were two stands located in the gravel pit west of the road and one more stand along Walnut Creek, east of the road. With flashlight in hand, Darwin walked along the edge of the field north of the creek towards the east fence line.  The stand was located in the corner of the fence line and the creek.  At the east end of the field, Darwin shined the light up in the trees trying to locate the stand.  Seeing the stand, Darwin walked over to the tree.  The stand was empty, and there was no sign that Will had been there.

A work of fiction, Silent Woods tells of a deer bow hunter who arrowed a buck and blood trailed it into a large tract of public wildlife hunting area and was then shot and wounded, becoming a missing person in a thirteen-day survival ordeal.

Will Emley was a dedicated bowhunter for thirty-three years (1975-2008).  He became involved in archery in high school.  After a tour of duty in the U.S. Navy during the Vietnam Conflict, he attended college at Long Beach City College (1972-1974) and Iowa State University (1974-1978).  During his years at Iowa State University, Will renewed his skills in archery and began bow hunting for deer.

Employing the Boy Scout motto – “Being Prepared” -- Will was certified by the State of Iowa Department of Natural Resources, as a hunting education instructor (1983), teaching youth the skills for responsible and safe hunting.  He specialized in teaching bow hunting and survival/first aid.  Will received the State of Iowa Governor’s Volunteer Award (1990) and the Iowa Hunter Education Instructor of the Year Award (2006).  He continued teaching hunter education until 2017.

Will Emley authored articles for magazines.  “Backcountry Survival” – tips for the carrying of proper equipment for hunter survival, was published in Bowhunting Magazine, the January 1998 issue.  Other articles concerning bow hunting skills and experiences were published in the Christian Bowhunters Magazine.  This book is a continuation of his writing efforts to educate hunters concerning survival skills, being prepared.

Will Emley is continuing the hunting heritage with his son and grandchildren.  The future of hunting depends upon the forefathers training the youth to be responsible and safe hunters in the future.  Will now spends his hunting time pursuing deer and turkey with a shotgun.