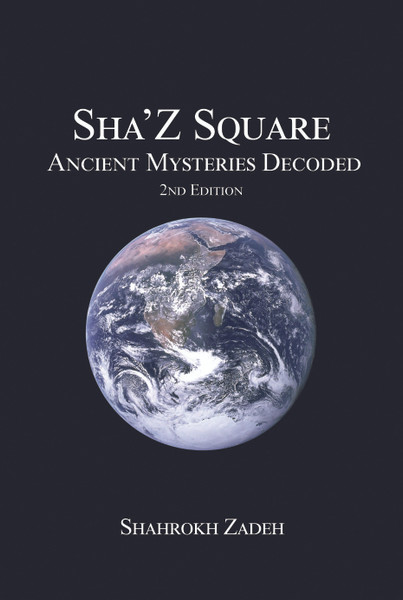 Sha’Z Square: Ancient Mysteries Decoded examines several historical places to highlight mathematical similarities and relations. For the first time, four historical sites and structures are studied through new lenses to discover how they mathematically correlate with each other and with other notable structures on Earth. Structures of Ziggurat of Dur, Ziggurat of Ur, Ziggurat of Chogha Zanbil, and the Taq-e Boston Site are corners of a rhombus-shaped area that the author names Sha’Z Square. This area has an interesting geometrical connection with some other historical structures such as the Kaaba, the Giza Pyramids, the Sphinx, the Colossi of Memnon, the Church of Saint George, the Statue of Christ the Redeemer, the Leshan Giant Buddha, the Arc de Triomphe de l'Étoile, and more.

Many discoveries are revealed, and Sha’Z Square or a spot nearby might be the center of the lands on Earth and the merged land of Africa, Asia, and Europe. Were our ancient architectures aware of this information? Explore how our ancient engineers have fascinated the public for thousands of years. Be ready to burst ideas that might contradict our normal understanding of the evolution of the ancient civilization. By studying each section, more questions arise than answers.

Shahrokh Zadeh was born and raised in Iran and has been a resident of the United States of America since 2009. He received his Bachelor of Science in Solid States Physics in 1994 and his Master’s in Management Information Systems (MIS) in 2019. Shahrokh has always been fascinated with scientific disciplines. Studying these topics over the past 27 years, which at times was daunting and very complex, gave him the confidence to publish his conclusions.

The Alphabet of Lesser Celebrated Creatures

Don't Let Your Past Define You - eBook