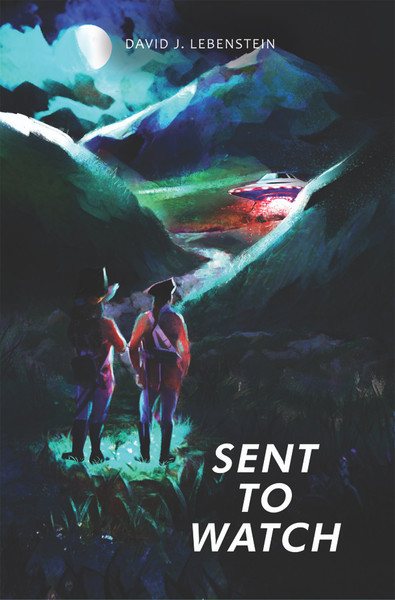 “Sent to watch, but not to affect”—such is the Noninterference Protocol that binds

Unni Vlaytork and her two fellow agents, Ori Svavapass and Urelt Sraymlat, are assigned to a faction on “Earth 48” known as the British Empire during the Regency of Prince George. They find themselves at odds with their agency’s Noninterference Protocol when a cruel and aggressive starfaring empire is discovered in another part of the galaxy.

The agents conceive a plan to accelerate the technical development of the planet, hoping to have Earth 48 admitted to the Confederation before the invaders arrive. Two of the agents are to marry, have a son, and groom him to be a future prime minister who would carry out the necessary reforms. The success of the plan hinges on hiding this apparent violation of the Noninterference Protocol from an inflexible superior officer.

But there is another complication: both Ori and Urelt are in love with Unni.

David J. Lebenstein grew up on Long Island. He is a geoscientist and has worked in the petroleum industry and in environmental remediation. Since his youth, Lebenstein has had an interest in history and in planetary science. He is an amateur musician and composer. Lebenstein has been married for over thirty-five years and is a father and a grandfather.

READERS' FAVORITE REVIEW 5 OUT OF 5 STARS!

"Sent To Watch by David J. Lebenstein is a science fiction novel set just after the historic battle of Waterloo. Our Earth, called Earth 48, is just one of the many planets with life. Aliens do exist and they are all humans. These ‘humans’ have an alliance in which they allow other Earths to join the Confederation of Civilized Planets when they reach a certain level of technological advancement. Earth 48 is still primitive but it is one of the planets under close observation as it moves closer to membership status. The Interplanetary Intelligence Service is expected to watch but not affect anything that happens on the planets that they observe. They would have stuck to this protocol but the Vittmians, an enemy alien race empire, threatens a peaceful projection. The agents of the Interplanetary Intelligence Service working on Earth 48 have bled alongside their charges and feel more than a little attached.

David J. Lebenstein is an imaginative writer and a brilliant historian. I studied British history and have read many novels set in historically significant times but Sent To Watch taught me about the political atmosphere and the expected turnout after the war. We get an inside look at what life was like for people in those days and I’m not talking about fancy balls and the lives of the wealthy nobles. Because of the nature of the story, there is a lot of military detail but it didn’t take away from normal everyday people and events. Another thing I found enjoyable was the world view as to which nations would emerge as global leaders and it is clear that might is not always the determining factor. Looking at history in hindsight, I can safely say no one can really predict the future. I loved agent Ori most because he observed Earth 48 and thought of it as home.

Many people assume that humans will gain the capacity to ignore greed and the desire to have more and more as technology advances but I think that is impossible as long as someone desires to stand heads and shoulders above others no matter the cost. It’s one of the reasons world leaders can't seem to satisfy people because they just have to prove how superior they are. In this book, however, the leaders are working to improve and protect everyone’s lives."

[Following is an official OnlineBookClub.org review of "Sent to Watch" by David J. Lebenstein.]

Sent to Watch by David J. Lebenstein is a science fiction book about an Interplanetary Intelligence Service interested in watching the developments of different "Earths," about 52 in all. Some of these "Earths" are a part of the confederation, others are under surveillance, and others are opposed to the idea of joining the confederation. One of the "Earths" in surveillance, Earth 48, is unique with intelligent natives who are right-handed instead of the usual left-handed. Agents are sent throughout the major continents of this Earth in twos and threes, but the story focuses on the agents sent to the British Empire. They get into trouble together with their team leader going against a major rule. Did they triumph? The Interplanetary Intelligence Service is faced with a bigger challenge of an upcoming enemy that is growing rapidly between the planets. Would the Interplanetary Intelligence Service fall or rise?

The author switched the names of the agents between their names used on Earth 48 and their native names in the course of the story. And I found this amazing. For instance, Major Robert Weatherby is Agent Ori Svavapass, and Lieutenant William Greenhill is Urelt Sraymlat and many other agents. They didn't only change their names but their outlook, adjusting to the lifestyle of whatever role they were asked to play. I found this intriguing, especially the part of Unni, who posed as Jenny Carter, a poor girl from the countryside.

The story highlighted issues of our world with the events that happened. It also opened my mind to the workings of the world we live in and the depth of selfish human interests. At a point in the story, the unity of purpose was divided with selfish interests attached to work. And this is a sort of enlightenment to the ways of the world we live in. And I see this as a positive aspect of the book. Reading the book was like seeing everything playing out before my eyes and at the same time happening in my mind. It was like I was a part of the story. This feature really impressed me.

I found the book a great read as I read through each chapter, with my curiosity growing rapidly with each page I progressed through. I must say I admired the general outlook of the book, the arrangements of its content, the diction, the names of characters, the dates, and the places used in the story. I didn't find it confusing but thrilling. I dislike nothing about the book.

Consequently, Sent to Watch gets a well-deserved 4 out of 4 stars from me. It is the best fantasy book I have come across. The events were well detailed and addressed one at a time. It was easy to navigate through and comprehend. I found it thrilling, intriguing, and informative. I recommend this book to those who are interested in science fiction and fantasy books. You would be in awe as you read through each chapter. The book was also edited professionally.

They Died on My Watch - eBook

Watch Out for the Elephants! - eBook